Dryad Quest RPG by Nekon, Dryad Quest is an adult game, text-based RPG set in a fantasy world filled with magic, faeries and all kinds of monster-girls with extra bits for you to play with.

You take the role of a young Dryad, a member of an ancient race whose roots go straight to The Aos Sí, the first children and worshipers of Nature – an omnipresent entity responsible for the creation of all living things. In this day and age, it is your people’s duty to preserve the cycle of life and contain the spread of the corruption to where your ancestors sealed it many thousands years ago at a great cost of blood and effort and half of the planet that had already been too tainted to try to save it.

To fulfill their arduous task and keep the other part of the world safe from the demon’s decay, Dryads draw their power from Nature, devoting their whole lives to serving Her. When other more primitive races use the essence of life, colloquially known as semen, to follow the most basic postulate of Nature – to propagate and spread, a Dryad uses her body to conduct the almost boundless amount of energy hidden in this potent substance for much more practical purposes, ranging from basic life improvement tricks to the most powerful feats of sorcery rivaling demigods, depending on how skilled the Dryad is. Will you become the hero this world needs or will you succumb to the corruption and join the ranks of those you’re meant to fight? Depends entirely on you! 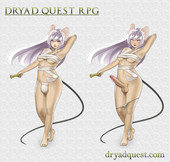