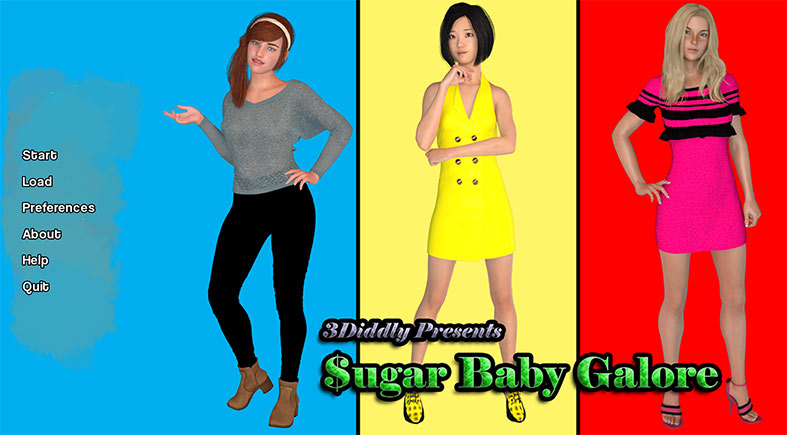 Sugar Baby Galore v1.12 Public by 3Diddly In this game, Sugar Baby Galore is a game about the main character, Victor Lane, is a successful self made business man. He has decided to take advantage of his financial situation, and date beautiful young women.

Corruption Path: By choosing the Corruption Path, Victor will exploit the Sugar Baby for his own sexual desires, and transform her into a sex symbol.
After the intro, you will be able to check on the status or date each of the Sugar Babies.
Currently there are 3 Sugar Babies in the game, and they will have different outcomes depending on your actions

Cheat for NTR stuff:
(Shift+o) then:

v1.06 Public
In this update, the PC will be able to let Hazel get impregnated by an associate! She doesn’t know this man, but she really likes the money… Repeatable scenes added for this route!

v1.04
In this update, the PC will be able to progress with Hazel for the move in scene on the Guidance path. This scene will be more romantic, and will require Hazel to be the PC’s girlfriend. She will also have prepared a little something for the PC!

In this update, the PC can take Hazel to her High School Prom (Guidance Path)! This date will be more romantic than the Corruption Path! Comes with High and Low lovepoint dialogue as usual. The PC will be able to get a lot closer to Hazel in this update.

v0.97
In this update, the PC will be able to continue with Hazel in the Guidance Path. The approach will be different, but the PC will also be able to take the V card on this date!

v0.95
In this update, there will be an event with April if the PC has either achieved 9 or 0 Love Points with her by week 29 on the Guidance route. She will be less submissive, but will still want to please the PC in her own way! This route will be more romantic!

April’s pregnancy is now fixed, so she shouldn’t be 99 weeks pregnant from her 2nd pregnancy and not pop. (This was tedious to fix, as there were so many different routes)

v0.94
In this update, there will be an event with April if the PC has either achieved 9 or 0 Love Points with her by week 29 (Only corruption route. Guidance will be implemented likely next update). This has a chance of happening at the end of the week, so just keep going on dates if you hit all the criteria already. During this event, the PC will be able to have more control over the fun that happens compared to the other dates, and is considered a secret reward event! If a specific thing turns you on, you can repeat it as many times as you want! Some scenes will have extra dialogue if you do repeat the scenes, and April may like or dislike certain things. This will also replace the Drop in option in the menu if you have seen the event once, so you can revisit it as many times as you want.

v0.93
In this update, Hazel dates will finally branch between the Guidance and Corruption path. (Date 3) The PC has asked her to work as a personal assistant at his home office, and he will be able to get closer to her! Try both routes to get the Gallery images!
– Removed Hazel NTR path on corruption route. This will be reimplemented later in another way.

The PC can also ask Lionel to impregnate Lee if sharing is on. Dialogue will differ if she has not broken up with Tan. Repeatable impregnations also added for Lionel.

Cross event 6 added: This event is between April and Lee. Both must be on the Guidance route. April needs to be the PC’s girlfriend, cannot be pregnant, and be living with the PC. Lee also needs to be living with the PC and cannot be pregnant. This scene will trigger after the move in scene. This event will be mandatory if the PC wants Lee as a girlfriend on the Guidance route. This will be implemented later. Why? Cuz I said so.

0.90
New Event: Katie
Happens after week 25, and Brianne’s 8th date is complete.
In this event the PC can alter Katie’s path. You can either push her to continue down the corruption path, or return to the manipulation path in the former game.

The PC can decide to talk to her about her personal life, and will also be able to choose 1 of 3 different options:

1. Have a night alone with Katie

3. Watch Mr. Wright and Katie through a camera

Each one will have differing dialogue!

Finally, the PC will be able to move on in the Corruption route with Lee! In this update, lee will go through her final transformation, and become the fully sexually submissive woman that’s lodged deep within her subconscious desires. Bring her husband along for the fun if he’s around! There are no choices in this date, it’s more of an event that differs with previous choices. Try low and high Love Points, and splitting up her and Tan vs keeping them together.

v0.86
In this update, the PC can impregnate Brianne if his Love Points are high enough! Just go to the talk menu in the end game, and you will be able to access this option. Like the other girls, the pregnancy goes by weeks and you will see her body change. I made it go a little faster (1 week per scene) so it’s less repetitive, and I will probably change it for the other girls later too.
Also, I changed the requirement for secret NTR route for Brianne’s Love points to be 6 or less.

v0.84
In this update, Brianne’s end game was updated. Like April, you will be able to ask her to move in with you after the last date if her Love Points are high enough. There is a dropin date, and a “move in scene” for both routes (Click Talk in the menu).
Brianne will have a new room available to her in this update. If the PC chooses to not have her live in, it will be a guest room when he decides to invite her over. If Kelvin is still her boyfriend, he will be living in the house as well (lol).
Brianne will be able to live with the PC on the guidance path. Brianne reacts differently in this route, and will want to sleep in the PC’s room instead of her own room. If the PC feels suffocated (lol) he can can put some distance between Brianne and himself.
The last part of the 0.84 update includes a cross scene from Brianne and April. This scene will trigger when both girls live with the PC, along with some other conditions. Again, the dialogue will be different depending on their Love Points, and whether or not Kelvin is still in the picture. Check the guide on how to get to the scene.

0.80:
In this update, the PC will be able to take Lee on the Guidance path for date 7. The PC will have the option of breaking up her marriage here, but there will not be any cuckolding option in the Guidance path. If Lee does not like the PC enough, she will leave him so be careful! After this, Lee will feel more at liberty to express her feelings for the PC! She will finally open up!

The PC will also be able to bring Hazel on a date! Hazel needs some financial assistance for school, and the PC can easily help her in that domain. The date has no strings attached. The PC will be able to pick Hazel’s route from this date, and this will determine Hazel’s fate: she will eventually either be financially independent by investing in the stock market, or become a dependent office slut to be used by the PC at will!

After the first date and some random dates, the PC can take Hazel out for shopping. The pretext is to buy her some clothes for work, but depending on the path the player picks, the PC will have different objectives. The PC will also be able to get a little more intimate at the end of the second date!