Non Monstrum v0.06.11 by Malum Oculus, Non Monstrum is a game about on the continent island of Etrus on the world of Ealia, join Lily Blossom, the last slimegirl, on her quest to discover her past and find her future as she follows her heart down a pure path. Help blossom her from nothing to a legend, the legend of the Pure Empress. Witness the birth of the age order, and you play the girl who started it all.​

Changelog
v0.06.11
Changes:
– One more scene for Greengaze
– Various Bugfixes
The game will be going on hiatus for a while.

v0.06.10
Changes:
– Three more scenes for Greengaze
– Two new bits of art for Grace, her first unbirth scene(redone), and the repeatable breast feeding scene.
Sorry for the small update, but this month was very hard and didn’t have a lot of time to work.

v0.06.7
– 17000 words of story, the biggest update for a while.
– Including three sexy scenes with three new characters 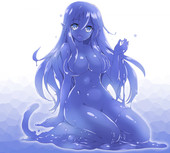 QUEST SYSTEM: Put the code “QuestFix” into the yellow smoke at the city gate to update it.