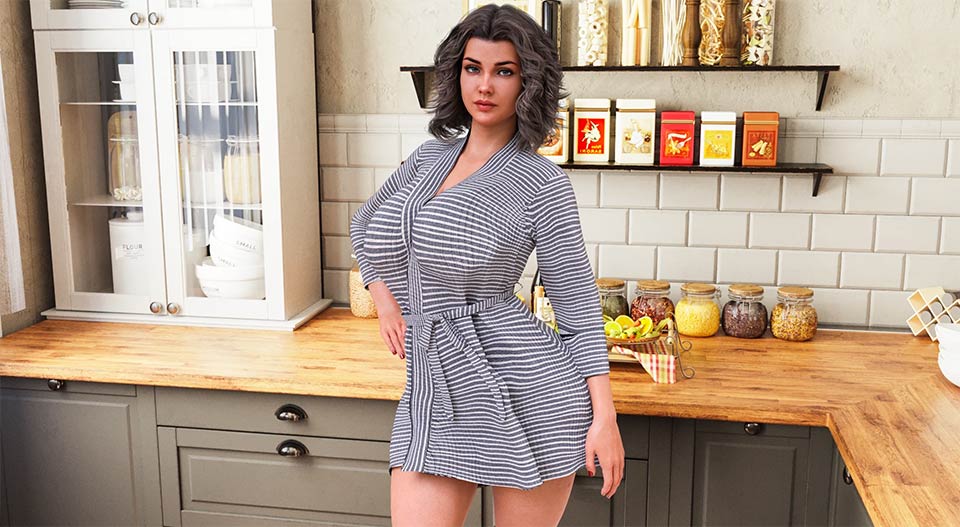 MILFs of Sunville! v8.01 Extra by L7team, MILFs of Sunville! is a game about a young guy is forced to leave his luxurious life in a big city behind and return to a small town of Sunville, located near the ocean shore. He dreams of going back and is mad at his father who ditched him for a young wife, and left him without any financial support. He must find a way and acquire the means to make his plan come true, but will he be able to do it?

A lot of temptations await him on his way.
The college he’s going to attend is full of sexy girls and teachers.
He needs to make a choice: follow his original goal or dive into a seductive world of love affairs.
But nothing is ever easy — some relationships will demand changes from him.
He comes into town as a simple guy, will he be able to change?
And what direction will those changes take?
Will he become better or worse?
There are a lot of different ways of achieving his goals.

You’re going to assume the role of that young man in a visual novel with excellent animations and quality graphics.
The game also has a slew of cool features. For example, you can take hidden photos with your phone’s camera.
Explore the world of MILFs of Sunville!
Dive deep into realistic relationships with people around you!

Installation
1. Extract game to its own folder
2. Run
Changelog
v8.0.0
It contains 3000 new lines of dialogue, 1558 new images and many hot animations!

Thanks to the players, we found a bug that is fixed in a hotfix.

If you don’t play in German and don’t use “Mute All” feature in the game, you can skip this fix.

v3
This update includes around 1k new pictures and some extremely hot animations!

v0.2
This update consists of 1012 new pictures and cool animations!

Dev notes
We’re team L7!
This team was established to create a line of high-quality projects, the first of which is called MILFs of Sunville.

Every member of our team that consists of seven people has more than three years of game development experience.

By the way, one of the team’s founding members and the source of its inspiration is none other than DecentMonkey.
He’s a reputable author that’s been in the community for years.

We’re planning to invest all our experience and all our skills into this project.
We already have a work pipeline and high time management skills, so you can expect the game to get regular updates.

Download For FASHION BUSINESS Patch
MEDIAFIRE   *Notice: This PATCH only works for V7 Extra and not V8 Extra.

Hello People. PATCH for Fashion Business’s content that where locked behind activation code and when I asked him he said that probably that crack will work for this game as well so I tried it and guess what…It works!!!
I checked it and I was able to see the bonus content.

Download the crack/patcg, EXTRACT IT FIRST! then just put it in the “game” folder and it should work.

***Because of game’s script is written in Russian so have to translate some choices into English so it may lead to some weird problems involving language if you use another language. Sorry for this inconvenience. Use this mod at your own risk.

Surrendering to My Crush [v1.02][BolskanLewd]