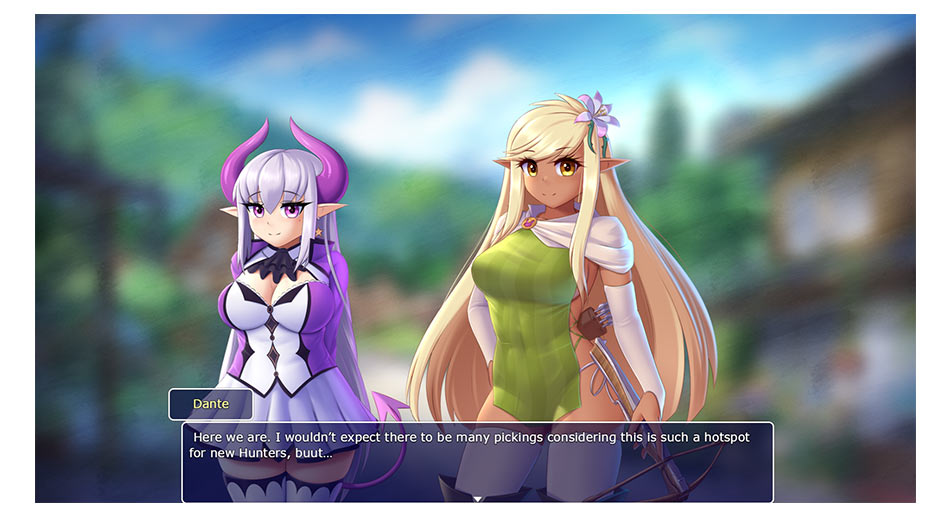 Minor:
Lyra’s Blessing Level 3 can now be equipped on everyone.
Cecile and Lyra now disappear from the Hunter’s Tavern until Little Shroom City is complete, then they reappear with new dialogue.
Cecile’s Sex Scene can be replayed from the Hunter’s Tavern once its unlocked.
Warrior, Jackpot and Hunter Medals can now be equipped in the blessing slot.
Rainbow Shell Bracer has been changed to have a 36% chance to lower a stat by 18%, and for 5 turns instead of 4.
Zombie now prevents lifesteal.

Fixes:
Beating Juggernaut now properly gives an Enchanted Megalixir, instead of only the day after.
Highstriker now sets the score to 0 before starting.
Rainbow Shell Bracer now properly debuffs enemies instead of buffing them.
Fixed Historia running out of mana in her training arena fight and being unable to do anything.
Golden Finals tournament can now be replayed.

Bessie, Ray and You enter the biggest colosseum in the world, and this time winning or losing is completely up to you. The difference between winning 10,000 G and 0 G. With everything on the line, can you beat the hardest challenge yet?

When starting the game with an old save, all of your skills with be messed up. I’ve set-up a check at Mistral Village and the Colosseum Foyer to sync your old characters to the new skills. Your characters will be set to level 11 which is roughly the expected level to enter Episode 5. If you were a high level and want to restore your levels, press ‘page-up’ at Mistral Village to open a debug menu.

v4.3.0:
Major:
– Released Android port: All menus have mouse functionality, fixed game getting stuck on black screen. Removed all music from Android version.
– New Main Menu, Contract Menu, Information Broker and Townsfolk Menus for all towns. All menus in general have been polished.
– The Scrying Room now shows every single scene in the game.
– The Scrying Room is now always available and doesn’t have to be built.
– Keke’s sex scene has been fixed and can be enjoyed again
– Colosseum Foyer and Waiting Room added. (Nothing to be done here yet)
– Hopefully fixed a few crashes

Minor:
– Reduced the hits from Bessie’s Limit Break “Fully Automatic bolts” by 66%, and increased the damage so it’s the same with less hits.
– Sleeping/resting no longer advances item collection progress. Only contracts and story events can do that.
– Alraune’s Luster Weapon not properly provides the Bio and Sleep spells.
– Fixed the exit to world map in the Snowy Wilderness
– Casting haste on a target now cures slow on them, and casting slow removes haste.
– You can now flee from the Training Dummy (Press cancel on anyone’s turn, then select escape)
– Moving the cursor no longer creates a feedback sound. (OK/Cancel still do)

– Using “Change Equipment” hides the turn order in the top right. Anyone know how to fix this?

4.2.2:
– When travelling between areas, the area you’re currently in is no longer shown
– Fixed Scying Room building with the Alchemical Building upgrade, instead of its own.
– Fixed the Protagonist’s Blessing only being equippable on Ray
– Fixed the Game Over menu sometimes softlocking the game.
– You can no longer walk on brick walls at the inn
– Some typo fixes thanks to f-zoned

Minor:
– ~25 New Items, 4 New Passive skills
– Made it so you can only buy one of every building and upgrade!
– Updated several quests and fights so they can’t be repeated farrmed for experience, you can still farm for gold, though.
– Rebalanced the Mistral Village contracts to make the Mighty Manticores easier
– Added the training dummy to the training arena. It can be used to farm TP, or just experiment with skills.
– Added’s Ray’s sex scenes to her house, they can be repeated.
– Gave Keke EX a battle sprite
– The Yellow Drips now drop lightning themed items.
– Fixed a bug that prevented you from opening the menu after visiting the Mistral Village contract board.
– Ray’s Mindblast weapon correctly gives you the mind blast skill.
– Keke no longer drops the Pumpkin Queen’s Legendary Pumpkin Slayer Sword.
– Actually added the Eris’s Blessing drop to the scene you get it.
– Smoke Bomb on a Stick no longer replaces attack with ‘Water’
– Fixed the Dual shields not giving you the Shield Bash ability.
– Nerfed the starting swords, and Rat-Killer. (-1 Attack)
– Fixed the exploit where you can increase the village of the quality and increase resource collection by just sleeping,
– Made Pumpkin Queen immune to confusion
– Various typo fixes
– Various variable fixes

4.01:
– Added Mistral Village as a fully functional place to be managed. (You won’t have enough gemstones to build everything yet, but they’re all operational!)
– 3 Contracts are currently available, each with a sex scene. (4 total lewd scenes)

3.03:
– Altered the Pumpkin Queen fight so there’s no longer a game breaking bug if using the Steel Armor set.
– Updated the credits with all new music tracks
– Changed some of the equipment for side characters so you can’t steal late-game gear.

3.02
– Reset all the necessary variables at the start of the Manor contract so it’s consistent every time you play it, even if you replay it. It’s now a self-contained thing
– Fixed it so if you die in one of the Yulia battles you don’t lose your characters and get booted to the Misty Woods menu

3.00
– Old saves corrupted. To immediately access new material you can use the episode select and choose ‘episode 3’.
– Protagonist no longer has a pre-defined personality and there is now an emphasise on player choice and reaction.

Important Notes:
– Old saves are broken again, use the episode select to get a 100% episode 4 save. Unfortunately this is something that was absolutely necessary. I don’t foresee saves ever breaking again, though.