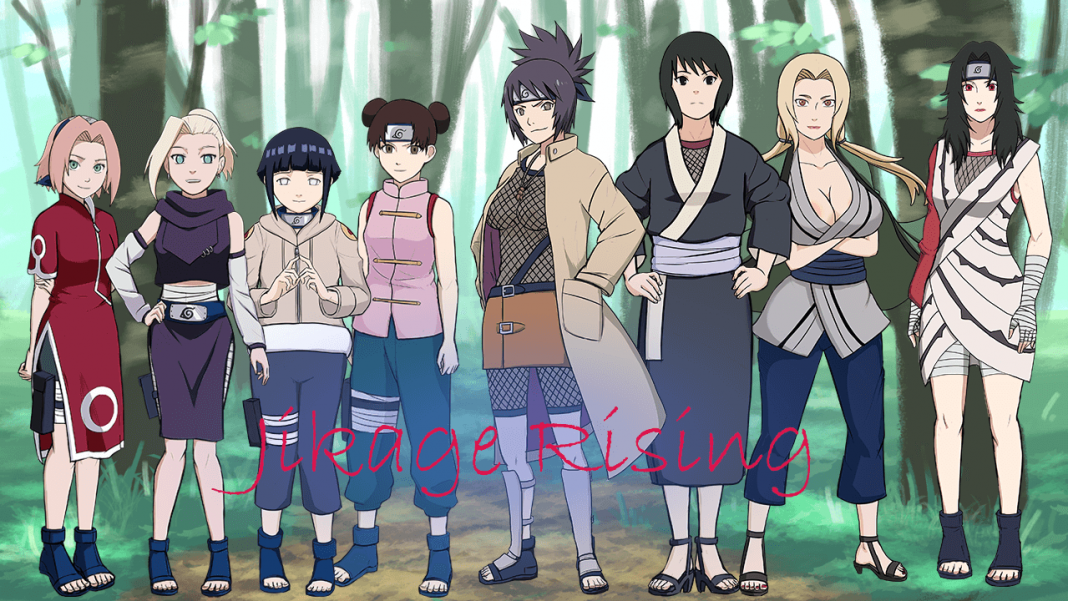 Jikage Rising v1.25 Public by Smiling Dog, Jikage Rising game is about never having achieved much in Konoha, you suddenly find yourself back to the past. With the help of the mysterious Saru, you unlocked the power of your clan and gained the ability to turn others into your followers. You will have have to track down and indoctrinate key kunoichi that will be useful in your quest to revive your clan.​

v1.18b Public
-Kurotsuchi added
-Some UI updated
-A scene for Kurotsuchi
-Event for Kurotsuchi
-Adding in animation for Tenten x Mabui scene
-Ability to recruit Ino to join battles not added yet due to art not being done
-Added ability to check girl’s stats in training menu in the Hokage building
-Some other minor stuff that I probably forgot.

v1.16
-New scene for Mabui
-Progress for Karin
-Added in the ability to recruit Sakura and Hinata
-Added in the chance to gain stats when completing missions for the MC
-Added in option to train the stats of the girls in the Hokage Building
-Minor UI updates/ improvements
-Added in some minor dialogue for Karin
-Will add in missing scene for Mabui when I get back on Monday

v1.15c
-Karin introduction
-Mabui intro event
-Mabui BJ scene
-Mabui wohoo scene
Also realised that we probably added the most art for this update so far some reason, mostly cause we have some “cutscenes” for non-sexytime stuff as well now. Let me know if you guys prefer to have stuff like this or if y’all just purely want sexy stuff yeah!

On the side of bad news, there was some changes done to the mission system and we kinda broke it for now, it’s not gonna be permanently broken, the coder is trying to fix it now and it’ll pretty much be a plug and play thing, I’ll update the game once he sends me the updated mission system and Temari should be ready to be leveled up!

-Updated drop rate of outfits from boxes from 5% to 10%

Update 17/8/2020: Heya guys, I updated Tsunade’s questlog, updated the gallery, and since we have a little more funding now, I had a scene commissioned for her level 3 event which I basically revamped Tsunade’s lvl 3 scene a little bit, you can also skip the fight if you are unable to beat her, and added Tsunade’s level 3 event to the gallery so you can view it without re-doing/ reloading the save haha.

Update: Had to reupload because I’m a dumbass and I forgot to add one line which cause the whole patch to be useless. The links are re-upped, make sure to use the links on the actual post yeah!

Sorry for the errors!

Heya all! Jikage Rising v0.15a is now out for Patrons!

Got a bit carried away with the content again, so sorry for the delay! This time I added in 3 more outfits, courtesy of a Patron! Also instead of the usual 2 scenes, I added in Shizune’s level 3 event, Anko’s level 3 event, Tsunade’s level 3 event, a battle for Tsunade, 3 a couple more sex scenes this time! I’ll update the walkthrough shortly, so no worries!

Gameplay
Arc 1
You will need to gain complete control over Sakura, Ino, Tenten and Hinata. You will need to gain their trust to find openings to use the jutsu on them and turn them into your loyal thralls. You will then use their abilities and connections to ultimately control Tsunade and use her power to further your agenda.

Arc 2
It has been a few years after you made Tsunade your loyal servant, you have improved upon your technique and now look towards gaining the support of other villages to start your own. This time, your targets will be the various girls from the other villages…

Arc 3
Will be disclosed in the future

Commonly asked questions
Q: Is the art stolen?
A: No, specific instructions were given to the artist to have the art as close to the original source as possible!

Q: How can I help?
A: Well, getting more funds to get more resources would definitely help haha. However, other than that you can help out by letting me know about any bugs, spelling or grammar mistakes you find in the game!
It would also help the game if more people were aware that it existed, even by just recommending the game (if you think it’s good enough) would help out the game a lot!

Issues with graphics/lag
1)Hold down Shift while starting the game, or press Shift+G once Ren’Py has started.
2)From the “Graphics Acceleration” menu that appears, choose the renderer to use.
3)Choose “Quit”, then restart.

If that doesn’t work, try updating your graphics driver.

Issues with graphics/lag
1)Hold down Shift while starting the game, or press Shift+G once Ren’Py has started.
2)From the “Graphics Acceleration” menu that appears, choose the renderer to use.
3)Choose “Quit”, then restart.

If that doesn’t work, try updating your graphics driver.

*NEW FEATURES!
Hair Color Changes
Ability to possess the girls and use them to corrupt each other at Ino 5
Lots of new Dialog
Reworked Scenes
Ability to train the girls bodies