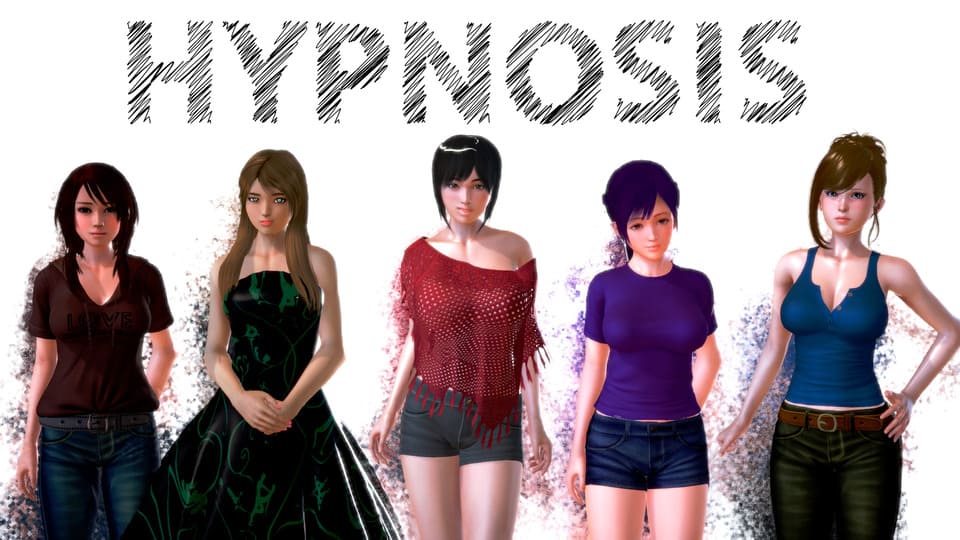 Hypnosis by Expanding Universe, This game is about You moved in with your best friend and his family under one condition:
That you don’t hook up with your friend’s cute little sister Leah who seems to have a crush on you.

The game begins with Leah complaining that her boobs are too small.
To make her feel better you pull out your grandfather’s pocket watch and wave it in front of her, telling her that her boobs will grow.
This somehow works, and soon all of Leah’s friends are asking you to hypnotize them also.

The game is less based on mind control than the title suggests, as the hypnosis is used more for body transformations such as giving the girls more curves.

There are five main girls with storylines to explore romantically, each with additional friends to introduce you to.

Broken Watch Ending part1v1.0.4
This update (v1.0.4) is a beta release and is only intended for game testers.
It is missing many scenes, contains errors and is not meant to be played.

This ending takes place on the timeline where you never recovered the watch.
Finish the previous episode to find the link to the new content.
Also, find a list of all the major endings after the credits.

Ep.13b (Beta) v0.9.9
This is the beta version meant for testing and is missing many renders and contains several errors.
It is not meant to be played yet.
This version contains one new h-scene, spanning 12 images and some other character introductions and such. Totally 93 new images.

For Episode 12:
Since there will be extra time until the next episode of Hypnosis, I made an effort to follow up on certain requests.

Is this new update worth playing if you already played through the episode?
Probably not, unless you want to see any of the scenes mentioned. All together there is probably about a half hour of new content throughout, but most of it is spread out.
My main goal was to spend the time I didn’t have when I was trying to get out the past two updates to polish up and expand some of the storylines to what I had initially envisioned and to add in some people’s ideas because they were too good not to.

v0.8.2 Ep10.5
The Cruise Ending-
Take Laura and Grace on a cruise. Good luck keeping them from the buffet.
It begins when you ask Laura to be your girlfriend at the beginning of Episode 10
This ending is longer than Episode 10 in content. And more fun.

v0.8.2 Ep10.5
The Cruise Ending-
Take Laura and Grace on a cuise. Good luck keeping them from the buffet.
It begins when you ask Laura to be your girlfriend at the beginning of Episode 10
This ending is longer than Episode 10 in content. And more fun.

v0.8.1 Ep10
Discover the answer to “what happened to the pocket watch?”
You have a few different paths to explore as you are helped by your volunteer “detectives” Daphne and Grace.

v0.7.2 Ep9.5
This version includes the first real ending of the game.
It is over half the length of Episode 9 and has a decent amount of content, especially if you hooked up with Brittany in Episode 7.

Find it near the beginning of Episode 8.
Choose Laura when you first get to Laura’s house for the pool party.

v0.7.1 Ep9
This episode is about the fallout from Episode 8

v0.6.2 Ep8
Fixed a couple wardrobe inconsistencies and issues with dialogue names being wrong in certain scenes.
Added more to the Leah/Ashley sex scene toward the end.
40+ fixes on grammatical errors and mistakes throughout the game.

Pool Party! Take all the girls and put them in one place. Add ice, booze and stir. It’s going down.

v0.5.3 Ep.7
The Episode is called Wingman because Cory corners you and calls you out for not sharing your recent streak with him.
You agree to take him out to the bars and have the chance to take him to Jenn’s party. Catch up with Jenn and Haley and meet a few of their friends.

The alternate Leah storyline is now updated and begins in Episode One.
You have the option not to kiss her initially, and this starts an alternate (possibly better?) storyline where your relationship with Leah begins slower and is encouraged by Ashley.
It also avoids making the girls angry at you for trying to date them at the same time, but you still end up with both girls.
It took longer than I hoped, as some of the days got moved around and a lot of dialogue needed to be rewritten on top of the new scenes.
I tested it, but I’m sure I missed a few things. Let me know any errors on Discord as you spot them.

Dev Notes
What to expect in the game:
School girls, dating, virgins, harem, breast expansion, lactation, pregnancy.
What not to expect:
You won’t find NTR, anyone under the age of 18, incest or anything non-consensual.
Images