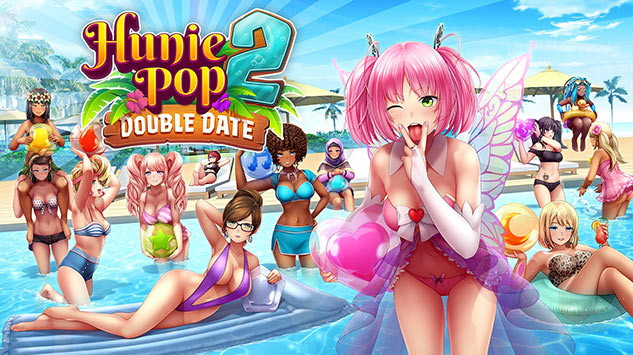 An era of darkness and destruction draws near as an ancient evil of limitless lechery, the Nymphojinn, will soon be awoken by a cosmic super-period of unspeakable PMS. Reunite with Kyu, your old love fairy sidekick, and travel to the island of Inna De Poona to develop your double dating prowess and overcome the insatiable lust of the demonic pair.

v1.0.4
The store now has tabs that let you filter the items by item type.
You can now click the girl pair relationship slots within the a girl’s profile to instantly switch over to the opposite girl’s profile.
Just for fun, there is now a 10% chance that Kyu will show up in one of four alternate outfits when you visit her at the hotel room.
Added a code that lets players swap out Abia’s headwear for alternate hairstyles. This can be done if certain players have a particular sensitivity to her normal fashion sense, or just to mix things up a little. All you have to do is submit the code “THE HAIRIER THE BETTER” in the code section of the title screen. If you want to swap back, just submit the code again.
Changed the compression on some of our art assets so they look a little better.
Fixed a whole bunch of typos.

v1.0.3
I have added keyboard shortcuts that players can use to change the screen resolution at any time. Pressing “Ctrl+DownArrow” will make the screen resolution smaller and “Ctrl+UpArrow” will make it bigger. I am hoping that this will help some of the players who are having screen resolution issues. I have tested this on a 4:3 monitor that was cutting off part of the game window and using the shortcut keys to make the resolution smaller worked like a charm. I realize it’s not a perfect solution but I hope it will suffice for now. More than a few players have reported that smoothies, unique gifts and/or shoes stopped showing up in the store under the impression that it must be a bug. This actually isn’t a bug, but I completely understand the confusion. The availability of these gifts is influenced by how much baggage the player has learned about. If a player notices that these items are not showing up, it just means they need to talk to the girls more and learn about more baggage. This wasn’t really explained so I added a special notice at the end of Kyu’s baggage explanation scene that makes the relationship between baggage and the store much more clear.
POTENTIAL SPOILERS START
Fixed a bug that was allowing players to unlock post-game “expanded wardrobe” outfits by completing alpha mode dates.
POTENTIAL SPOILERS END