The Promise v0.67 by Xagrim’s Gameforge, The Promise is a game about you play as a man aged forty who has given his family a lot of promises. And now it’s time to follow up on them. You must work hard and make many decisions for your life. And those will have influence on others, as well.

The game is created with Ren‘Py and features 3D renders and animations made in DAZ Studio 3D. The game has an individual main story (The Promise) and a global main story. (But you don’t have to follow it, if you don’t like it). There are many side stories and smaller events, based on your decisions. It is possible that you close a route or get a different outcome.

There are some hidden stats for triggering certain situations and stats showing per example the corruption of your wife. You will have to raise corruption and the relationships with your family to get certain events and more.

The game will have different endings for each character. Many things will be influenced by what you do. Many things are possible. You can have an affair, cheat, or live in absolute love with your wife. You can make her more open for other things and more. But be careful with your decisions – it is possible that the situation gets out of control. The game will be a combination of grinding and on time and choices depending situations.​

It is made with Ren‘Py and with 3D renders and animations (DAZ3D). The game has an individual main story (The Promise) and a global main story. (But you mustn’t follow it when you didn’t like it). It give much sidestories and smaller events which based on your decisions. It is possible that you close a route or get a different outcome.
Over 4.050 images
Over 80.000 words completly proofread by SDevil (95 % of the game)
Animations fo some situations
Two jobs (Waste Collector, Farmer) with unique events, the outcome depends on your decisions and small side events.
Some locations to explore : 3 Districts with townhall, shop, bar, clothes store, cinema, public pool, farm , park and landfill
Depended on your interests and gameplay some hours of playtime.

v0.57
Content (216 new images, 3 animations):
Have you already visited your wife at work about ten times, then it is time for a new office outfit (Added the next shopping tour for a new office outfit with Michelle)
And added the new outfit images when meeting Michelle in the bedroom at 10:00 or the kitchen, additionally some new pictures in the kitchen for the common clothes.
Jack has volunteered to be a swimming teacher for your wife and he doesn’t seem to want anything in return or does he? (Added the next three visits with your wife at the public pool)
There is nothing better than a night of watching television with your lovely wife and cuddling together. (Added a tv cuddling part with Michelle)
For the naughty gamers there are some cheeky new kitchen reactions with Michelle. (Added some more pictures and reactions for your wife if you peep at her in the kitchen)
Reworked the social talk with Nina so she has something to say when you chat with her at the Cinema or Public pool. (Added a reply for each level with her relationship)
Nina appreciates it when you visit her house on a Monday evening with a flower or a good book. Well, actually it is a very bad book. (Added the next steps at home with Nina, you have now more choices)
During an innocent walk you can sometimes make someone do not so innocent things. (Added the next walk with Nina triggered from her house on a Monday evening)
Are you sleeping peacefully at night and who is next to your bed again? Exactly your adopted daughter. (Added next massage with Lisa (if you have made the right choices before during earlier massages)
You don’t want Lisa getting muscle problems, but you don’t want bags under the eyes for it either. Time to make good agreements. (Repeatable massages on Sundays with different outcomes. Try to find out where it hurts in this brand new mini game.
Improved some dialogues and scenes (Thanks to SDevil (Editor and Scenario Writer))
Gameplay:
Added the new GUI for your House
Reworked the current Stats and added some new ones.
Reworked the City map a little bit to make navigating easier.
Added therefore some more information in the Tutorial
You can now reach all locations over the map directly and no longer need to go by another location like the park or news stand.
Changed some variables for the first shopping event with the wife
Changed some variables for the office events with the wife so it suits better with her levels.
Changed some variables for Lisa so they suit better with her storyline.
Bugfixing:
Fixed some bugs with the hints in the stats, some wrong info won’t show up any longer
Fixed a bug triggering the pool event with the wife
Fixed some smaller bugs 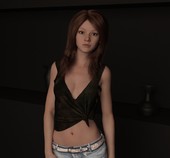