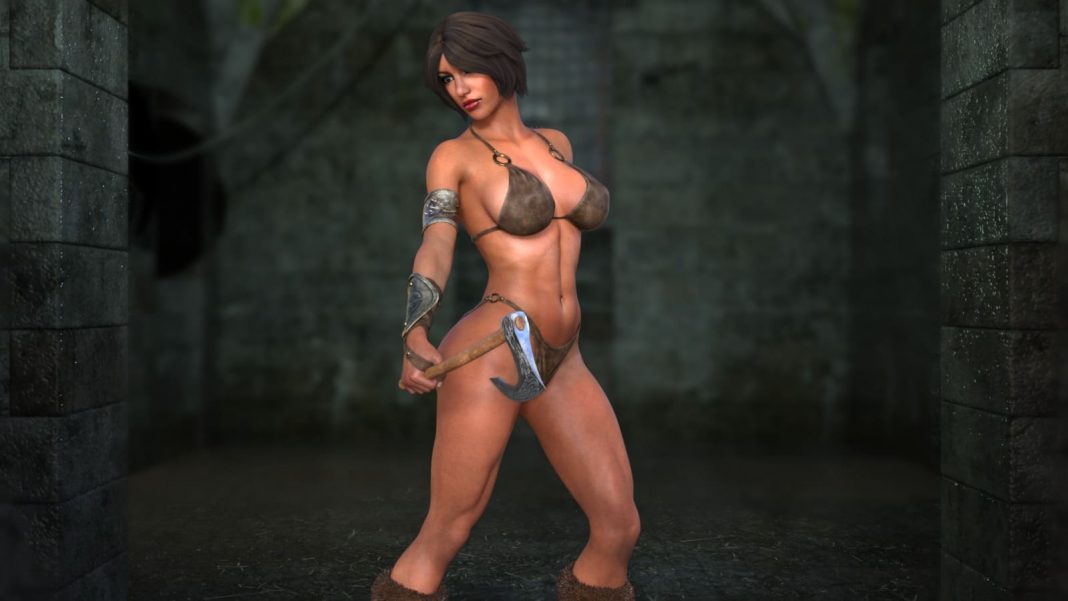 The Last Barbarian v0.9.4 by Viktor Black, The Last Barbarian is a third-person action role-playing game. You are encouraged by the game to proceed with caution, learn from past mistakes, or find alternate areas to explore. If you are not careful, monsters will be able to have sex with you and you will have to start from the very beginning.

“The Last Barbarian” takes place in a fantasy N’ul-realm, plunged into darkness and debauchery after the arrival of the ancient Goddess of Flesh. She gives everyone what they want most. But she distorts all desires and so the whole world is plunged into perversion and violence. Everything around is nourished by sexual energy.

The protagonist of the game woke up in the dungeon after the battle with the orcs in her village. She is the last barbarian from a tribe of local Amazons. They never submitted to anyone and valued only their freedom and love. But now she is driven by a thirst for revenge and a desire to revive her tribe.

Hello Everyone!
It’s time for the new release.
At this time I paid attention to some global things. I like to make new content for you, but some things should be fixed and I had to clean the mess with the code at least. I’m trying to follow my tradition: posting releases on the 5th-8th of every month. So what’s new?
Sound and Music update
I reworked all the current scenes to fit them to the new Sound Mixer controller. It allows us to change volume via settings screen and manage them without lags.
For particular scenes the music has been changed.
Footstep sound has been updated and it is related to the surface type.
“Ghost footstep” effect while Barbarian Idle – fixed.
I missed some sounds here so I left it for a quick fix edition.
Opening screen changes
Many players told me that Main music theme at the start screen is a bit spooky. It’s changed now.
Stats and Saves
After each release I had many reports like:

First of all, I’m deeply sorry about the release delay. Developer life is kinda unpredictable things, sometimes one small thing breaks all your plans and you spend many hours trying to realize what’s going on. And then, you realize that you forget to switch one small script.

I very appreciate your suggestions and bugreports. It helps me to grow and improve the game. The following bugs had been fixed:

You can test it in the Dungeon location after the “self-locking” barbarian scene.

One of the biggest problems of the game is the chaotic story. I said that I want to bring the story to order and I need to implement quest log for this. Finally it’s ready. So the following dev iterations I will focus on fitting existing scripts to each other and expanding them if needed. The quest log is placed on an additional screen of the game menu. For now, it works for whole game scripts, but I’m working on it to bring the whole game to this format.

I left fast travel for testing reasons, but I don’t recommend using it, because it may break your quest progress. For the 0.9.4, fast travel will be “unlockable” and related to your in-game progress.

In the first dungeon, we meet few elven girls, but these characters look like decorations (models have been updated). So you can save them (Lick hanging elf pussy, massage clit with foot and sperm swap scene added). This quest is driven by a quest log module and related to save Anorien’s wife event. Also I need this quest to make one additional location with events suggested by the community.

This event had been unfinished. Now, if you escape via trap door (which follows you outside not to the Mines) and you enter again, you meet Shorca – the queen of the orcs. Try to challenge her if you want to set Noria free. (new smut scenes added)

The gallery resize is coming!

One more big thing is coming for the next week! Thanks to Akhilleon and his amazing AI image upscaler, we have all gallery items upscaled! For example. Old gallery items were 1000×560, new 1920×1080. Now it will be 4000×2200!!!! I need some time to manage more than 30GB of data, but soon I’ll post it here. Community makes impossible real! Yay!

Priest and Demon rewards will be available tomorrow. I need to finish post processing for the gallery and pack it into build.

Hello Everyone!
The new update is here, but before change-log let me say a few words about my workflow. I got many questions like: “when something be done?” or “why is something delayed to the next release?” If you didn’t know, I’m a single developer and I’m trying to publish updates every month. So I have very limited time for development, production, testing etc. When the new release comes it contains things which are “ready to use” right now (animations, events, scenes). Some parts of the game require a bit more time for development and testing (like enemies AI, battle system improvements, pregnancy effect and quest system)
That is why some events may appear “unrelated” to the story. But be sure, every event in the game matters. You can ask me: Vik, why is your development so chaotic? And I’ll agree with you. Frankly, I started development as absolutely zero in gamedev and made a lot of mistakes. But I don’t want to abandon this project and am gonna finish it before I start a new one.
So. What’s new?
Narration changes and additions.
Due to the making of a quest log system (which will help you to navigate in the game in the near future) I had to make few changes in the current story.
When you wake up in the cell at the start of the game, you can escape freely. Now the door is locked. You can find a hidden lever or try to trick green Orc by using Wooden Stocks.

N’akhzeran
After giving first birth (egg), you can ask the cultist woman about why Barbarian is laying eggs.
After killing your evil twin in “tentacle dimension” and getting your armor, you can ask the cultist about it. Due to the fact that armor is temporarily available in your inventory this dialogue appears without killing your twin. (it will be changed after quest system implementation)
Mines
After defeating torus and getting living armor, Torus will make purpose to bring him “new mothers” to restore the world. It opens hidden “Initiation room” (this room is available in fast travel menu due testing reasons)
New location – Initiation room
This location contains 4 “meat walls” and wooden stock. When you “capture enemy soul” it moves here.
Also, you can interact with these walls by yourself. The result is related to barbarian pregnancy state.
New location – Your own home
I got suggestions about this location many times. Also I needed the place where you’ll be able to stack your inventory (in future updates). Also, some of the players asked me: How they can control stats of barbarian pussy and ass. Previously, it was available via cheat menu. Now, you can use sex machine to stretch her holes and special balm for tightening.
How to get it?
If you buy Devenant papers in City Hall, you’ll get this.
This location will be extended in the next updates.
Sex scene selection
One more suggestion was about selecting sex scene after defeat. Now, when Barbarina is knocked down, you can press a particular number of animation to apply on her. You can’t swap it if it’s already applied.
X-ray update
I promised to do this for a long time ago and started to implement it in the previous release. Press “X” to enable/disable “internal view”
Giving birth
Yes. While the barbarian lays the eggs, you can see what’s going on inside.
Brown Orc
Saddle sex scene has been changed and available in 2 variations. x-ray added.
Saddle anal sex – fixed and x-ray added.
Missionary pose -x-ray added.
Standing sex pose -x-ray added.
Double penetration (Arena location) -x-ray added.
Werewolf
Doggy style – x-ray added.
Standing ass fuck – x-ray added.
Vampire
Standing behind ass fuck – x-ray added.
Butter Churner pose – x-ray added.
Tentacles
In the Hall of torture, x-ray was added for: egg stuffer near Anorien wife and tentacle trap
In the Noria hut x-ray was applied to tentacles summoned by book.
Dragon
The scene where Whodra impregnates Barbarian contains x-ray.
Sienna
The scene when you turn the witch to futa and she fucks barbarian and missionary sex on the bed were expanded with x-ray.
Lactation
I guess it was a bit unfair, when you were able to milk barbarian in Witch hut only. So, if the lactation effect is on, press “L” to milk her. Also, during the sex scenes, you can press ” L” to squirt milk while she has sex (originally it was a bug, but I decided it seems as very smut feature) .
Letel Dimension
Camera in the Letel dimension has been partly fixed. Why partly? I didn’t finish the first person move controller. But, I solved the problem with insane camera shaking when you walk or run in POV mode. Unfortunately, you can’t move backward for now (I need to redo her locomotion animation for POV movement).
Noria can make you blowjob if you have Living armor.