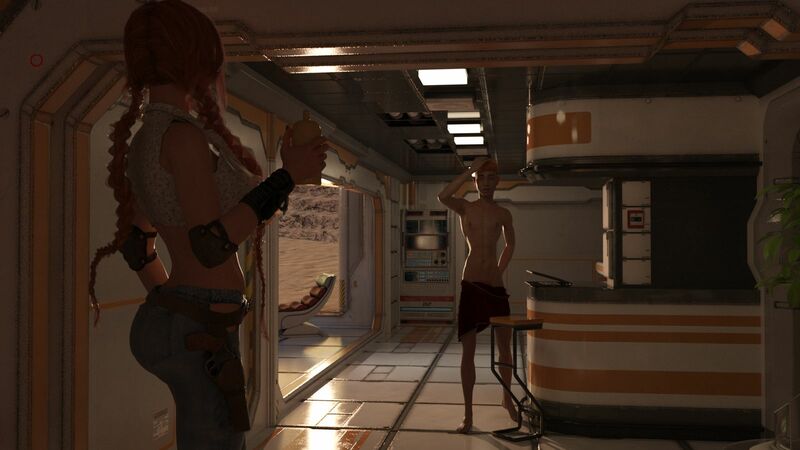 Your path is open for you to choose. Help a self-aware AI find out what it feels like to be human; or find out just what connection the strict Drill Sergeant has to your past. Seduce your childhood sweetheart; or humiliate your school bully. Explore kinks you never even knew you had!​

Oh… and you can also claim a big reward from Meera in the Brig… as long as you’re able so willing to inform on your cellmates.

v0.3.7b
NOTE: This is a bugfix and walkthrough Update only! There is no additional story/image content.
– New Cis Integrated Walkthrough
– New Sp4nker and Sp4nked kinks added
– Shortened some file paths to help those playing the game from remote locations
– Adjusted some of the UI to create a better Android and Mac experience
– Added extra Hint for moments in the game where players often get stuck.
– Fixed continuity issue with Cis and mindreading.
– 100s of bug/typo fixes – big thanks to devSin for patiently trawling through them all!
– Big backend revamp to prep for Phase 2

Huge amount of bugs throughout the game now fixed; including:

– walkthrough fritzes should now be a think of the past!

– some fixes have been made to clean up Daemonology

– Personnel Files are now fully operational for all characters in your Stable! [except Info]

– Scene Replays are now operational for all characters!

– Galleries have been added for all characters [accessed from Personnel Files]

note – you have to replay the Cis conversation to see these]

v0.3.7 Public
KEY FEATURES:
– Find out all about Ensign Cis, and shape your relationship with her.
– 625 new images
– m/f, m/m or mixed routes
– 2 New Maincast characters & 4 New Background characters! [including Cousin Felix]
+ New Walkthroughs for Anna and all Cole paths
+ The big Gojira-Potoum bugfix [Part 1 of the big, all-time, bughunt

v0.3.4b
t’s a big update, and there’s a bit of something for everybody. You’ll find 500 new pics, 2 new kinks, and 1 new character; alongside mm, mf, ff & bi content, tons of new music, jokes, conversations and backstory.

CHANGELOG:
338 New Images!
– you and your fellow cadets will be receiving a much anticipated reward!
– have an in depth conversation with Fatima about her life in the Backcountry, Ganymede and her brothers
– first PLI award [Fatima]
– 2 storyline sex-scenes and multiple sex fantasies
BUGFIXES & EXTRAS:
– fixed skirt poke through in brig01
– fixed ceiling tiles in showerblock01
– fixed various bicurious and bisexual anomalies
– fixed issue with screen freeze in basement scene
– added sister beretta to virtual stable (requires scene replay)
– added m/m version of taboo kink
​

Gameplay
There are several gameplay elements in SpaceCorps – with multiple choices to select your path in the Corps and which characters you want in your harem. Each NPC interaction has at least 3 potential endings, and you are engaged in an on-going dating sim to seduce your favourite fellow cadets. Various minigames – point-and-click, Stripsearch, Wrestlemania and more appear throughout.  There is never, ever any grind.

Progress
SpaceCorps is currently in Phase One of development – a (very!) extended intro in a visual novel format. In Phase Two, the game will become more sandbox – with optional training missions that build up your stats to see which of the 7 SpaceCorps Branches you enter. In Phase Three you will have to choose where your loyalties lie, with a dozen potential routes. Will you ascend the SpaceCorps hierarchy, launch a SpaceJihad, Defect to Cervaxia, or retire to a Monastery?