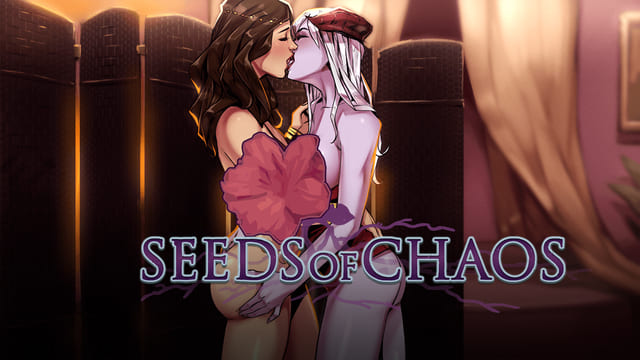 Seeds Of Chaos v0.2.61b by Vénus Noire, Seeds of Chaos Game is a dark fantasy eroge made in Ren’py, inspired by the worldbuilding of Berserk, Dark Souls, The Witcher and other epic fantasy series’, as well as the adult games Corruption of Champions, Legend of Queen Opala, and Slavemaker.

The game is set in The Six Realms, the westernmost continent in the world of Solanse. Seven years have passed since the last Demon War, and the defeat of Lord Karnas at the hands of the forces of Light ushered in a new era of peace and prosperity for all the races of the six kingdoms. Evil never lies dormant for long, however, and in the shadows new threats to the tenuous peace begin to stir.

In the first scenario, you play as Rowan, a veteran of the last Demon War. He and his fellow heroes, aided by the Goddess of Light, pursued Karnas to the heart of his stronghold, Castle Bloodmeen, and defeated him once and for all. Having hung up his sword upon returning to his peaceful home village and marrying his childhood sweetheart, Alexia, he finds his idyllic life shattered by the arrival of a beautiful, mysterious woman. Before he knows it, he is forced to serve the very darkness he fought to destroy seven years ago.

We have also added a number of QA features, including:

Finished the vast majority of outstanding Rastedel content, including (but not limited to);
– the rest of Maud’s path containing one new sex scene (Rowan x Maud)
– full integration of Werden’s route to the same level as Patricia and Jacques
– the alternative Patricia corruption route including one new sex scene (Rowan x Patricia)
– the post coronation epilogue containing one sex scene (??? x Marianne)

As mentioned earlier Rastedel is the focus this month, with nine new events to experience in the city, including further meetings with Patricia, Juliet, Baron Casimir, Captain Alarie, and a whole new area to explore – the Northside Alleys.

In addition to the Rastedel content, we also have two new ruler events, one of which is the concluding event for those on the Cliohna submission path, three new job events for Alexia, three more orc tribe resource events, and a new training event for the Helayna bedslave path.
This month, we have six new sex scenes:

Core Features
You are the bad guy – Unlike most games with alignment systems that allow you to be good, evil, or morally neutral, in Seeds of Chaos you play the villain. Ethical decisions will focus on just how corrupt you character is becoming, and the consequences of that change.Visual novel style scenes with complex, multi-branched dialogue trees inspired by Black Isle / Obsidian, Bioware, and the Witcher games that affect later meetings and events.A random event system that adapts to choices the player makes, and other variables (past events, stats, inventory content, reputation, affection, etc.) to shape the game as it progresses, adding replay value by providing different experiences on each playthrough (see Events below for more detail).Multiple endings (including bad ends).Quality original art by a number of talented artists.An original soundtrack by Leet Music, known for his work on numerous Winter Wolves projects.CG gallery, Music Room, and a Scene Replay gallery.If enough money is raised, rather than produce sequels, I’d like to work on expanding the world by adding alternate scenarios (new main characters with different stories), expansions (alternate event sets), and a trainer mode (similar to Slavemaker / Princess Trainer).There will also be a relatively safe for work version produced, with the sexually explicit content removed, for those who just want to play the game without the adult content.
Images