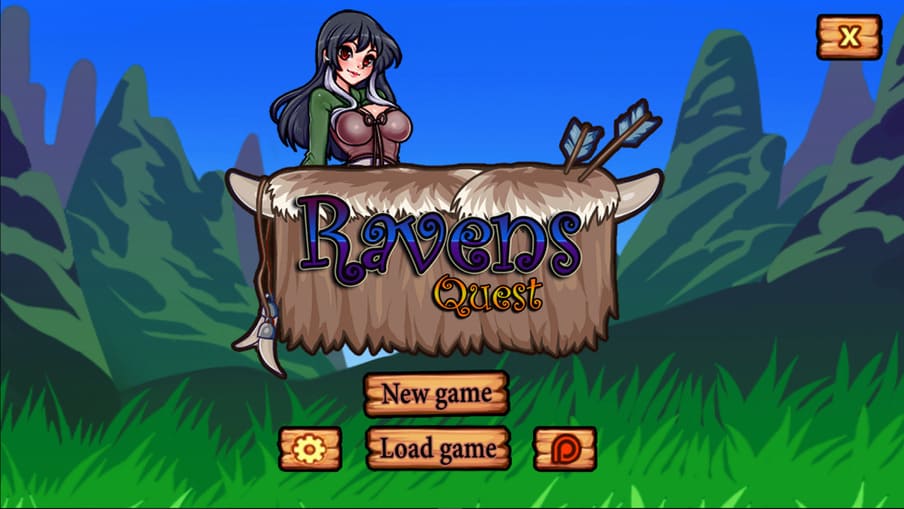 Raven’s Quest v1.2.0 Public by PiXel Games, Raven’s Quest is a game about Raven is a witch, but this is the only thing she knows for sure. She finds herself in a world named Lustein, where everyone seems to be extremely lustful. Everyone except a mysterious Order. Help her investigate and explore the world in this RPG, defeating monsters, find new events and customize Raven with lots and lots of different outfits!​

Installation
1- Extract to desired location.
2- Click on “Ravensquest.exe” to start playing.
CONSOLE COMMANDS
for .7 console commands i made a list of some useful ones

(do above for all of these to enable what you want)
list of clothes:
head:
_cat
_cowgirl
_playboy
_sexidol

– Raven can now adopt the dog she finds at Ashon city’s alleys!
– Raven can interact with her pet at home.
– Raven can now meet Sue after working in the VIP room, in the clantestine club of Ashon city. (After beating the game)
– New outfit: Samus’ bodysuit. Obtainable by buying it from Annie, in the cumlab. (After beating the game)
– New outfit: Half-digested Asuka’s bodysuit. Drop from tentacle monsters in the desert. (After beating the game)
– New hairstyle: Samus. (You can change hairstyles in Pervish)
– New hairstyle: Asuka.
– New nipple piercings: Chain. (You can change piercings in Ashon city)
– Added names to each of Raven’s outfits to find the sets easier.
– Updated the framework. It should fix the errors in Lunara’s mansion and the idol studio in Android devices.
– Fixed some smaller bugs.

v0.2.0
– New scene: Gangbang
– New character (Lunara): Meet Lunara in the continuation of the main quest!
– New outfit (St. Louis): A gift from Lunara after completing her questline. (Talk to her in the forest)
– New outfit (Reverse Bunny): A gift from a stranger in the clandestine club of Ashon city. (Commissioned by Tylord
– New hairstyle (Zelda): Raven can get new hairstyles in the hair dresser of Pervish.
– New hairstyle (Yoko)
– New place (Pervish): Visit Pervish, north of the desert!
– New main quest: Continue the main quest visiting Pervish. Meet new people, discover new places and see new events!
– New side-event: Raven can now meet Ty while working as a bunny girl in the clandestine club of Ashon city. (Commisioned by Tylord)
– New side-event: Raven can now talk with Elyana and Claire, when having the beast fetish activated, to introduce them to the horses, in Remi’s farm.
– Quality of life: Now it’s easier to travel between places with a new small menu at the right of the screen.

– New follower appearance: You can change the aspect of Elyana after completing her quest in her follower’s button.

– New place: Tentacle cave. Visit as many times as you want after completing Elyana’s quest.

– New side-event: Raven can find four young adventurers when exploring the Ashon Plains at night and when she’s a succubus.

– New outfit (Peach?): A man will appear when exploring the streets of Ashon City, after clearing its dungeon. Find him to have a chance at getting this outfit.

– New outfit (Mega-Slut!): Bella will have a new gift for Raven after visiting the men baths.

– New tattoos: Two new tattoos have been added to the tattoo parlor, in Ashon City. (For Raven’s backside)

– New cosmetic – Piercings: Raven can now get nipple piercings at the tattoo parlor, in Ashon City.

– Raven can now get more dominant or more submissive at the Black Stone, in the forest.