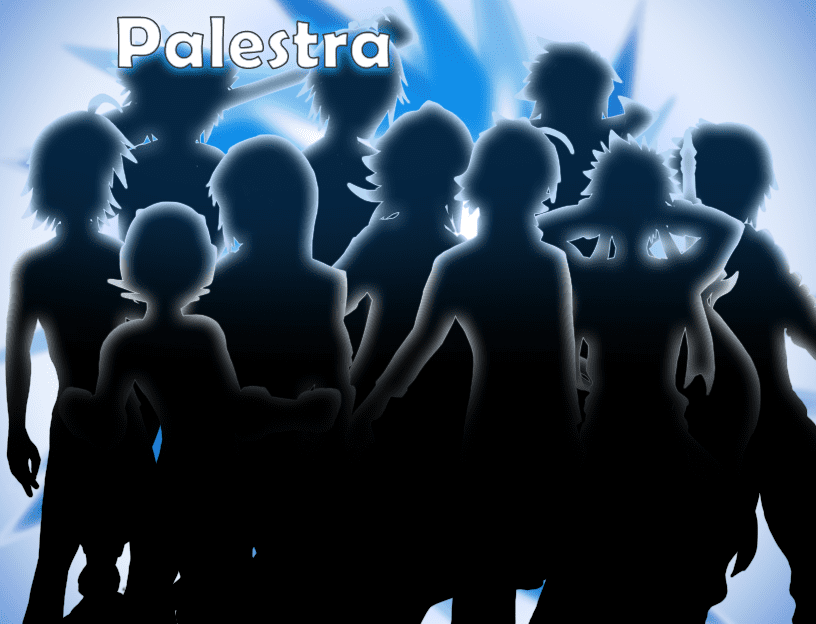 Palestra v1.43.1 by Redflash, Welcome to Palestra, this is a game about world, harems are a common thing and as a newly chosen harem leader, you must travel around and find potential members, recruit them and grow your harem!​

Current ending points:
– Slightly after recruiting Lubbock in the harem
– After seeing 2 CGs for Rex
– Shortly after Keith’s animated scene
– After Charlemagne’s animation
– After recruiting Megaman in the Harem

Changelog
*The password to start a new game is “Clef”

For this Palestra update, I’ve added a new special random event (Inside #18) for Reki and Souma. This update will have them play a game of Strip Dice and whoever loses well…. you probably know what happens xP.

Changelogs 1.41.2:
-Fixed Reki and Souma’s joker in the random event
-Fixed the Palestra S icon not appearing when it should (sleep for one day to fix it)
-Fixed some typos
-Fixed Reki’s event replay page
-Added a tag over the milkbar’s furniture shop

Changelogs 1.41.1:
– Fixed a bug about the demon clothes shop when trying to buy Reki’s brand

Changelogs 1.41:
– Added a new random event (Inside #18)
– Added 3 new outfits for Reki
– Added 2 new CGs
– Added Name tags above several NPCs to better identify some of them. *If you think any other NPC could use the tag, you can tell me in the comments.
– Fixed a bug where the player character would change appearance when switching some of Reki’s outfits.

*The password to start a new game is “Clef”

This new update brings Reki to Palestra! To start him, finish Castle Town’s quest, Manami’s story and Sora’s story. After you get the prompt by leaving the bedroom, you can go see Manami and begin Reki’s quest.*The password to start a new game is “Clef”

This new update brings Reki to Palestra! To start him, finish Castle Town’s quest, Manami’s story and Sora’s story. After you get the prompt by leaving the bedroom, you can go see Manami and begin Reki’s quest.

Changelogs 1.41.1:
– Fixed a bug about the demon clothes shop when trying to buy Reki’s brand

Changelogs 1.41:
– Added a new random event (Inside #18)
– Added 3 new outfits for Reki
– Added 2 new CGs
– Added Name tags above several NPCs to better identify some of them. *If you think any other NPC could use the tag, you can tell me in the comments.
– Fixed a bug where the player character would change appearance when switching some of Reki’s outfits.

Changelogs v1.40.1:
– Fixed another bug with the scene replay
– Fixed Reki’s dialogue sometimes skipping when he’s at the shop
– Fixed some dialogue errors
– Fixed Reki’s small talk not working when talking to him at home
– Fixed Reki’s sprite not changing when switching his outfits

v1.39
Changelogs:
– Added the next part of Kirito’s story
– Added 1 CG scene
– Added 1 new boss to Kirito’s daily
– Made some balance changes to some bosses (mainly nerfed the dragon and vampire a little)
– Added a new boss training room to Kirito’s daily (you can access by talking to the red haired guy near the castle, you can also use this room to test out the Expert Touches skill scenes there by using the bosses)
– Added over a dozen scenes with the Expert Touches skill
– Fixed some errors in Yuu’s dialogues

v1.38.1 changelogs:
– Alm’s “tasty oranges” should now be properly obtainable
– Made Yuu’s scene watchable in the scene replay
– Made some slight changes to Manami’s portraits (made his dick bigger to better fit his mentioned size)

v1.38
Changelogs:
– Added Yuu and Mika to the game
– Added some new outfits and underwears for Yuu
– Megaman dialogues added for Sorey
– Fixed some typos and dialogue portraits from the Sorey, Time and Alm updates
– Fixed the portraits for Link’s tentacle fabric and the teasings not working
– Removed the needed summon state for Ashe and Caspar time stop skill
– Reworked a little the behavior for Elsword’s Rune of Denial skill and Caspar and Ashe’s Time Stop skill
– Fixed a bug where you couldn’t continue Ritsuka’s daily activity if Shirou’s ascension quest was active
– Made Link’s daily ending trigger even if going to the milkbar with him so you can properly trigger the other dialogues and get his underwear
– Fixed a bug where Alm’s “Tasty Orange” underwear couldn’t be acquired
– Fixed a bug where Alm’s Aphrodisiac portrait wouldn’t be displayed
The password to start a new game is “Clef”
In this new update, you can now add Yuu to your harem. You can talk to him and do his daily activity by accessing the greenhouse near the beach in Katakura Town. To start Yuu, you must have completed Ritsuka’s story quest.

v1.36.1
Palestra:
This week mostly was a Palestra week to finish up the update. Aside from all the bugfixing and eventing I had to do, we also have the winner from the poll for the next update! For the March update, I will be making Alm to add him to the game! Alm is a character extension but since I will be making a rather complex animation, I think he will be a two-part character extension, but I hope you’ll enjoy what I have in mind for him hehe!

v1.35
– Added Vanitas’s portraits
– Added the option to tease Vanitas (his portraits will change depending on what Sora is wearing)
– Added the option to milk Vanitas (To milk Vanitas, you need to select Sora in the milking options and you’ll then get to select one of his side characters. Do know that due to how the characters were first programmed to be milked, you won’t be able to milk a side character if the main character is not pent up enough)
– Added 3 new events
– Added a new accessory to make the characters aroused when naked. The item can be bought at the market in Castle Town (To make a character naked, use the “Clear” option in the equipment menu, then equip the accessory)

– Fixed a few typos and dialogues

v1.34
– Added the shop from Sora’s minigame to the cabin after Sora’s quest has been completed.
– Added some new outfits for Sora
– Time can now join the harem
– A new character extension was started
– A new ero scene was added
– A new random event with Sora was added

v1.33
– Added a new CG/scene for Kirito
– Added 3 new outfits for Kirito/Eugeo
– Fixed a minor bug where pressing x when talking to Shinra would select the gift option instead of leaving
– Fixed a bug where Megaman’s suitless outfit didn’t have the right image
– Added the missing character’s semen (heroic) for the Blacksmith’s first quest
– Updated Kirito’s battle combat plugin to fix an animation issue

v1.30.1
– Fixed a bug where you wouldn’t properly receive Cervius’s reward. (If you claimed it before the fix, you will have to revert to a previous save if you want to properly claim it. The reward is some contest medals/points so if you can decide to just skip it)

v1.30
– Changed the MC’s default name to Ren as to avoid confusion with Hiro from WhiteBlade (If you’d like to have the new default name, you can go to the name change shop in the harem town)
– Added 1 new underwear and 1 new outfit for Sorey
– Added a new type of fabric: Elemental fabric which you can get either from Sorey’s daily activity or the shop at the Sea of Clouds
– Added Ragna’s swimsuit
– Added Ragna’s underwear for the MC
– Finished Ragna’s story (2 CGs)
– Added 1 new random event
– Made some adjustments to Sorey’s and Ragna’s portraits

– Fixed some typos
– Made some changes to the milking (multiple milking possible per day, selection changes)
– Added a new shop in Castle Town. By using this shop, you can trigger specific random events if you find out the numbers
– Added 2 new random events
– Added 3 new outfits
– Remade Corrin’s portraits
– Remade MC’s portraits
– You can now gain exra relationship points when wearing the new MC corruption outfit and then drink semen
– Added a new sex toy for Manami
– Fixed a few minor bugs with Keith’s story
– Changed the name of MC’s current Corruption outfit to Cervius’s outfit (If you want to change the name, you will unfortunately have to rebuy the outfit because the game cannot update already owned pieces of armor)
– Increased the item limit per room to 30 (if the rooms are laggy for you, I recommend not to put too many items)
– Buffed most of Shinra’s moves for the contests