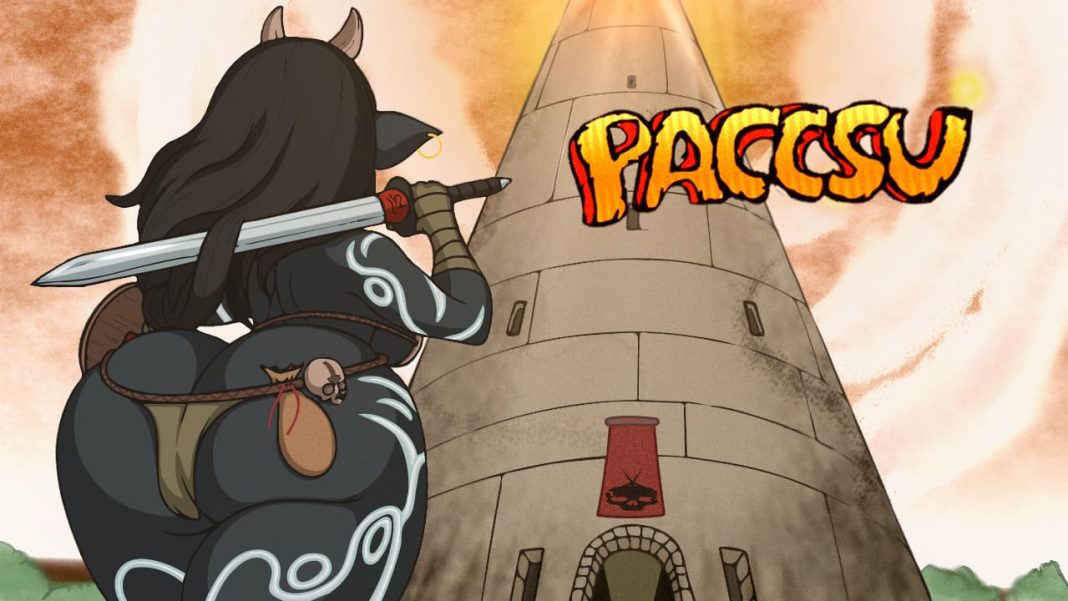 Paccsu by Zem – Namu’s Journey is a LEWD RPG game set in a fantasy world called Paccsu. You take control of a Muh’kean girl called Namu, who was taken away from her birth parents at a young age to be a part of a holy ritual in Muh’kea’s desperate attempt to fight The Undying King, the King of Zombies.

She was taken to the Kingdom of Ruo’ho by a human refugee couple to live by the shadow of the mystical Tukeva Tower, where she would live her life, train and grow strong. 18 years later, Namu is ready for the adventure with the help of her adoptive parents. Namu has no idea what happened in her past or has any memory of it or what kind of power she holds inside her. Soon, Namu finds herself in the middle of a crisis that threatens the whole world.

Namu’s journey begins when she is sent to investigate the mines where dangerous and bootylicious snakes from the Clan Tiss’i have been attacking the innocent human workers. It’s Namu’s job to save the world.

Some remnants of the Undying King still remain. Namu must deal with it!

Share some time with Kiva and learn about her past!

Discover the lost clan of Fembu and gain access to their library!

(no quest giver, just find em in the game)

New Areas:
Hero Manor (West Mainio)
Hero Manor is the Emperor’s special gift to Namu and her friends. In Hero Manor you can enable NewGame+! In here you get all the future quests of the game.

New Game+!
In the Hero Manor you can enable New Game+! When you start a new game with this save, you get some new starting gear and bonuses:

1. Use the NG+ machine upstairs of the mansion
2. Choose a save slot, save
3. Go to Main Menu
4. Load the save you just saved
Here’s the list of the stuff you’ll (hopefully) find in your New Game+! NOT GONNA TELL WHERE…

Elite/Shadow/Undying Undead Sorceress Tentacle All The Way Through scene with Namu is now fixed with looping parts
Princess Fancy-Tail’s bathing scene is now included in the gallery/Namu’s memory room
Purnima sticking her behind in Elder’s son’s face is now included in the gallery/Namu’s memory room
Updated the encounter with Maht’ava on top of the Kallo Tower with Namu’s, Kiva’s and Maht’avas cutscene pics
You can now enter the Cathedral in Mainio (joke event)
Slight changes made to the Status page(removed unnecessary information, made it a bit neater)
Added 3 pieces of art by Gross-Mind in the ending credits!
Removed that pool of purple goo behind the Kaupun’ki Inn so it won’t damage player lmffao
Made some balancing changes to Thousand Cuts/Million Cuts and Purnima’s Kunai Storm.
Buffed Arcanition (MP gain from 25% to 33% + 1% MP gain every turn for 3 turns)
Slightly lowered HP and damage of the Shark enemies. Decreased their Thunder and Ice resistances.
Purnima learns Meditation at level 30(with Throat Cut)
Purnima can now equip large shields
Increased Purnima’s overall Agility and Attack
Increased Damage of Viper’s Fangs (Purnima)
Slightly Increased Damage of Backstab (Purnima)
Shredding Claws lasts now 4 turns instead of 3 (Purnima)
Namu’s outfits now have small bonuses
Bug Fix:

Removed the “here ends 0.92” message lmao
The outfits will now appear in the cutscene with the Snake Guard (Forgotten Temple Entrance)
Vhetae Witchy’s Special Attack will now appear in the gallery once you have witnessed it NOW FOR REAL
Talking to Lehava Skinny-Tail in Mainio now displays all Namu’s costumes while talking to her
Protective Slimebubble can’t be dodged with Magic Evasion anymore (Kiva)
Save Included:

This version should fix the bug of the game getting stuck after the battle with The Undying King. Sorry about that! I am 99% sure what caused the bug so it should be fixed now.

Just a reminder:
Do NOT extract this version in the same folder as 0.9555. Do NOT merge/overwrite any files.
This version includes no saves, to avoid further confusion. Just paste in your “save” folder inside the “www” folder.

Namu and her friends are finally here – Castle Undying, where the source of all of our problems lies; The Undying King. Namu needs to explore the castle and find her way into the throne room.

A Shark Lady from the underwater city called Kala’hai needs Namu’s help. She needs Namu to retrieve an artifact from an ancient sunken temple called Temple of Vihol, which is guarded by the hostile clan of sharks called the Murderfins. Is it a simple fetch-quest or is there something sinister behind it? Something sure smells…. FISHY…

This mission is available on Ran’ta Notice Board when you’ve received the Tulijoki mission from Shaaden.

Muh’kea Halls is the first part of the final quest of the game!

Kiva Boobjob (The Battlegrounds, Bar) (Animated) ( Preview 1, Preview 2 )
Kiva gets offered a job at Battlefunn Bar as an exotic dancer and the club owner needs to see Kiva’s dancing skills to make sure she is a great dancer. Hehe. Heh.

This scene is unique for the Slime Mother Boss in Slime Forest.

Magic Shopkeeper in Kaupun’ki will no longer turn invisible after you’ve finished Mainio Excavation Site mission
Mainio Gate Guard will now move if you interract with him the second time (If you haven’t talked to Emperor yet)
(Purnima’s quest) Losing to the Bountyhunter will no longer get you stuck and results in a game over.
Watching Key Keeper “Slasher” scenes in the gallery will no longer remove HUD.
Save Included:

The newly opened shop in North Ran’ta is selling a mysterious instrument called Flute of the Void. It is said if you play this flute at The Great Chasm, you will wake up The Sleeping One…

IF your save is from older version of the game (0.12 or earlier) your save might not work properly. It’s because of the fancy HUD I implemented in 0.13. Sorry for the inconvenience.