The game is an open-world populated by women and girls who are just waiting for you. You will find girls looking for a more romantic relationship or nymphomaniacs ready to have sex at the first opportunity. Each character you meet will have its own specific personality and dozens of scenes to unlock.

The game is inspired by Girl Life but from the point of view of a male character.​

The game is compatible and executable with all major devices and browsers. The game is optimized to be usable also from smartphones.
For any problem, please send a report on the Contact page of lustforlifegame.com or contact me on Discord. I will reply within 24 hours.

SEX CONTENT
Introduced a new character in the game: Eva Elfie. Eva is your cousin and she will be moving to your city to attend university. For a few days she will come to live in your house as a guest before moving to an apartment on campus.

Note: I remind you that the offline version is not tested so there could be other bugs that I don’t know about. If you can, I suggest playing the free version on https://lustforlifegame.com/ which is constantly tested and maintained.

SEX CONTENT
Riley discovers that you and Caprice are in a romantic relationship and convinces you to start hanging out with her and Todd. During these outings, you’ll have to decide whether to be seduced by Riley and secretly cheat on Caprice or to remain faithful to her.

v0.9.0
The quests of 3 characters will intersect with each other. Dakota will need your help to avoid being expelled from school. This will lead to you dealing with Principal Ann and Ms. Summer and having new interactions and scenes with the three of them all at once as well. 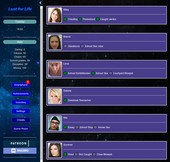