Kincaid Build 2021.11 Hotfix 2 by Cookiedraggy, Kincaid is a lewd metroidvania-style platformer with a sci-fi theme game. Our protagonist is an archeologist, exploring uncharted planets and their wild life!

Join our playful and naughty wolf girl Kincaid, as she sexplores flora & fauna and meets new friends (with benefits~) and adversaries!​

You’ll be able to face the Heavy BOI by going to the obvious boss room in the upper temple area (or start a new game, grab the upgrades you want and use the handy-dandy warp portal).

The boss is going to need some more polish around the cinematics and his tail slam attack effect is still missing, but I am taking a couple of days off and didn’t want to make you wait any longer! ^w^

Warp Room
If your save games get borked you can now start a blank save, grab any upgrades you want from the new start room and use one of the teleporters to get near where you last left off. This won’t fill out the map for you, but at least you don’t have to waste a bunch of time redoing everything.

I hope this quick fix helps with some of the frustration while Null makes a new save game system.

This build is a bit shorter on both features and new content. Null and I are focusing on finishing up the main story and redesigning the world map right now. Until that is completed we decided to make the next couple of builds smaller, focused on lewd content updates, until the overhaul is ready!

We promise the wait is going to be worth it!

The story that goes along with it is part of the main story, so it is a bit more in-depth and detailed than the “Game Over” ones. Altogether the story has 3694 words. I hope you have as much fun reading it as we had writing it!

IMPORTANT: You can access the new content by heading to the village and talking to the ‘bold wearing a pink scarf!

Some other things that changed:

I’m excited to present you with the newest installment of Kincaid!

This one started out as a Quality of Life build, but as life would have it, Null’s coding efforts took a little longer than he had anticipated and we decided to roll it together with a bunch of new content to make one bigger release.

The new CG set contains 8 variations and the story that goes along with it is almost 2800 words long (2798 to be exact)!
I also mentioned earlier that the build would release without sound effects for her, but our sound designer is a super star and he managed to deliver the new sounds way ahead of schedule!

The only thing missing still is Kincaid’s climax – The sound effect got uploaded just as I started uploading the build to Patreon. xD

Another big chunk of work in this build is the new combat system. Null wrote it completely from scratch for a variety of reasons. We also added a bunch of extra polish to combat to make it feel better:

Let us know what you think of the changes!

The Glitchcaid Rift in the chambers of the Kobold Queen has reopened! It now leads to a little preview area to showcase some of the art for the next planet we’ve been working on!

There’s also a new song added for this area as well!
Be sure to check it out!

In earlier builds of the game, when you hit your head it sent Kincaid flying down, making some jumps unnecessarily difficult.
Now, if you hit your head, Kincaid sticks to the ceiling for just a little bit, before starting to fall.
It’s a subtle change but it makes managing some areas much easier and it just feels nicer.

That’s the biggest changes so far! Be sure to check out the changelog for some minor things as well.

Changed
Air attack now has a dedicated animation with a hitbox that reaches above Kincaid’s head, making it easier to hit flying enemies.
Energy system and Glove blaster have been completely redesigned. Energy now works with charges. Healing and shooting require one charge. Blaster does a lot of damage.
Glitchcaid Rift has been removed.
Dash ability can be found in the Sunken Temple area
Metroid-Critter-Crawlies have a more forgiving hitbox

Fixed
Metroid-Critter-Crawlies can’t be used to get unlimited energy anymore. 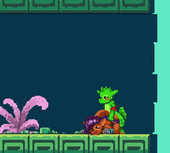 Download For Win/Lin
MEGA DROPMEFILES UPLOADHAVEN TRANSFER GOFILE FILESFM ZIPPY PIXELDRAIN WORKUPLOAD
CHEAT
MEDIAFIRE *This cheat table as any other cheat table requires Cheat Engine (official website)
1. Launch both Kincaid and Cheat Engine (if Cheat Engine asks for CEShare link insert this url: https://fearlessrevolution.com/ceshare/ )
2. Attach Cheat Engine to Kincaid
2.1. Click the button that glows like a “Gamer” RGB
2.2. Select kincaid process (should be at the bottom of the list)
2.3. Click “Open”
3. If you put cheat table into “My Cheat Tables” folder (can be found inside “Documents”) you will be prompted to load it automatically, otherwise open cheat table by pressing Ctrl+O
4. Click the checkbox beside “Enable cheats” (can be found at the top of the table in the bottom half)

To access cheats open related category (click the checkbox)
To enable cheat click the checkbox beside it’s name
All values except position can be edited
Many values require related action to be performed in order for Cheat Engine to catch there address (i.e. hit any enemy to access Max energy value)