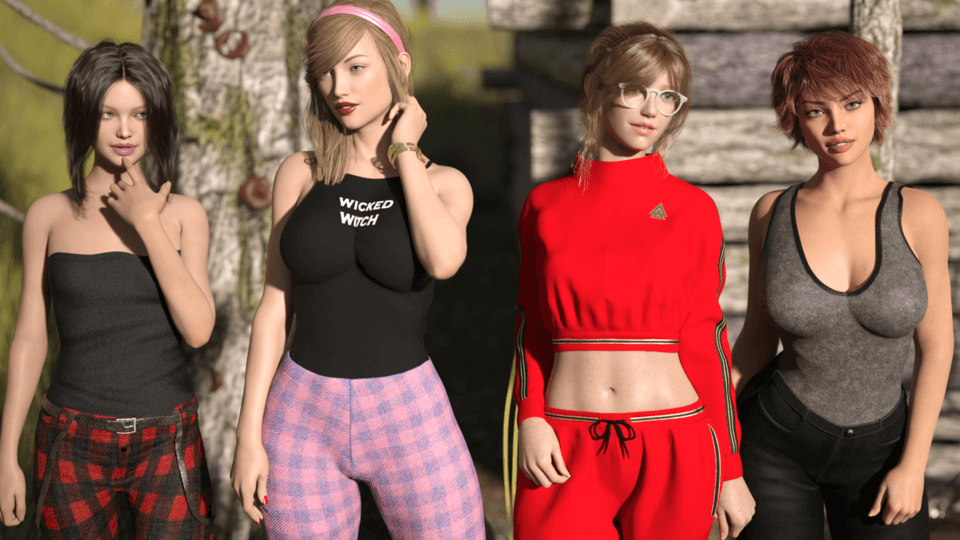 Dusklight Manor is adult game about you are a young man that was offered a great opportunity for a new job and you decide to take it. You arrive at the Dusklight Manor to begin your new life and work, here you meet three wonderful girls that are under the tutelage of Mistress Clara, an enigmatic figure with more secrets than you can imagine.

The girls you meet are Lizzie Monroe, Mary Best and Lola Mod and you can build up relationships with each of them, depending on who you like more. While working around the house you notice Mistress Clara using a sort of magic on the house butler to make him younger but you set that aside, believing you are imagining things…​

3DCG, Male Protagonist, Animated, Mystery, Romance
Installation
1. Extract and run.
Changelog
Final
This final episode brings the conclusion of the game by delivering Audrey’s Ending, Blood ending, and a short ending if you do not pick any of the girls or previous ending. The initial plan was to end Dusklight around Episode 14 but there was still much content to be added to the game so it was delayed until what is now Episode 16. The final episode is a bit shorter compared to the previous ones, however, it does add another 150 new images and adult animations.

Episode 15 brings two very important endings, the ending for Lemon and for Lola :

In order to access Lemon’s ending, you have to be in a sexual relationship with her and NOT have the blood story line. This is the only way that her ending can be achieved but I’m sure that most of you already know that. You can consult the walkthrough if you are having doubts on how to reach this point.

As for Lola’s ending, it’s much easier to access, as long as you are in a relationship with her or chose her over Audrey (if you had to make the choice) you are good to go. I decided not to put up any road blocks, there were enough temptations along the way already.

Of course, Episode 15 also brings story development and sets up the final endings, the one with Audrey and the Blood one. Episode 15 also brings new music and 230 new images and adult animations. Of course, your past decisions will heavily influence this Episode, the story will have small differences if something happened or did not happen. This takes place mostly if you had to pick between Lola and Audrey or if Lemon escaped or not. There’s much more to say about this Episode but I’ll let you see for yourself.

In Episode 14 we get to experience Mary’s ending and it is a happy and nice one, the kind of ending a cute girl like her deserves. If you are unsure about how to access her ending, check the walkthrough file for Episode 14. This Episode also brings a ton of new content for the main story and the Blood and Jackie side stories. The adult scenes in this Episode are particularly hot and kinky, the one with Mistress Clara is a real mind blower and you can access it if you have the Blood side story. This Episode also sets up more endings, including the one for Lemon, however there was not enough time to add it so it will be present in Episode 15.
Episode 14 also fixes some bugs that were present in previous versions, those should now be gone and game play should be smooth. This new update brings 275 new images and adult animations, awesome story line progress, romance, kink and much more!

There is a lot to say about Episode 13 so I will make it very short :
– 250+ new images and adult animations
– Fantasy ending with Audrey and Lola
– Story continuations for both Blood story line and Gossip squad (Jackie) story line
– Reached amazing milestone of a total of 3150 total images and animations
– Other stuff but already too much text  (music, bug fixes, and so on)

Episode 13 sets up multiple endings that are to come in the next Episodes, including Lola ending, Audrey ending and Lemon ending. This Episode is very dependent on your past choices, it almost ping-pongs from one to another (there is no way of accessing all the content in one single run, adding massively to the “replay-ability” aspect of the game. For example, the Blood and the Jackie story lines are mutually exclusive, the only way to access one is to not have the other started).

Also, the only way to access the Fantasy Ending is to be in a relationship with both Lola and Audrey. Sadly, Mary doesn’t have a very big role in this update, it’s next to impossible to feature all the characters fully, but she it there, she is present only in a smaller role.

Episode 12
This Episode brings the conclusion to Cora’s quest of turning, along with a sexy scene with Miriam if you meet the requirements (you can check the walkthrough if you are unclear). Not only that but it also brings a lot of story development, getting to meet a few new characters and much more.(some will show up again in the coming episodes)
Episode 12 brings Lizzie’s Ending.
Slowly, the game will come to it’s conclusion and with Episode 12 it takes another step in that direction. If you’re a Lizzie fan or even if you’re not you might want to check it out as it’s no ordinary, run of the mill relationship ending. Lizzie always was a bit out there and now she introduces you to a new friend of hers, of course, if you want to leave with them and spend your life with her…
Also, if you’re not a big fan of the whole Blood side story and decided to avoid it, be prepared to get a huge blast from the past in the form of the magnificent and mysterious Jackie. We only get a rather small glimpse of her but it is enough to get the fire burning in the Episodes to come!
This Episode brings 230 new images and animated adult scenes along with new sounds, some typo fixes and more!

Episode 11
In this episode, the action mostly happens around a last minute party that the Mistress decided to hold for some unknown reason. Not only that but she also has 3 mysterious guests invited that seem a bit off… Things don’t make sense for a while but everything comes together eventually when a big announcement is made. There are of course other things going on at the same time, you can evolve your relationship with Mary and Lemon as well as being involved with Cora if you are a part of the “Blood” event line.

This Episode brings 220 new images and adult animations. I have tried a new animation format in Cora’s scenes that I think is much better than the old ones, makes the character movements more fluid and realistic. Of course, this being the first try it’s nowhere near perfect but they do look better. No more spoilers, I’ll leave you to discover everything else on your own.

Please let me know if you encounter any issues with it so I can fix them.

Episode 10:
Episode 10 brings 250 new images and adult animations, new music and sound effects. This one is heavy on the adult content but the story does get some progression, making some things clear while also “tying up some loose ends”. Also as a quick side note, added markers in game when going from one Episode to another. (Basically an image saying “Episode 3” pops up when you complete Episode 2, this way you can find stuff easier in the walkthrough and keep track of your progress.)

Episode 9:
This Episode is also important because we broke a new record, the game so far has 2180+ hand crafted renders and animations. Each character was posed, lights adjusted, each camera placed with purpose and so on. That takes time and work but I think the end result is great, certainly much better than a cut-out of a character over a still and always the same background. The characters and the story deserve to come to life as much as possible and no amount of work is too much.

Episode 8:
This Episode brings 230 new renders (including video animations) and a ton of story content and progression. This is one of the most story packed Episodes so far, featuring plot twists and unexpected turn of events. This Episode also sets up the next one to bring even more plot developments but I’m not going to spoil it so you’ll just have to play Episode 8 and see for yourself.
Episode 8 also brings a good dose of kink and perversion so you’re going to have a field day on the “Blood” story path. The main story does not lag behind, some turn of events changing the flow of the game from now on.
Similar to Episode 7, the current Episode also relies on your past decisions, these are guiding the story and the action depending on some of your older choices.

Episode 6:
This Episode brings around 250 new images and animations and while it’s not the largest so far, it certainly brings a lot of new content to place it around 3rd place if we’re keeping score. Also, the total amount of images and animations reached 1500.
In this Episode Lola finally decides to take the next step, if of course you agree with it. Starting a relationship with her will lead to even more goodies in the coming Episodes. As usual you can expect story progression, plot twists and fun times with the girls. I’ll let you figure out the rest in game, I think there are enough spoilers here for now.

Ep. 5
This new Episode brings 235 new images and adult animations, interesting story development and and overall relaxed feeling. So sit back and enjoy the ride!

v0.2
This Episode brings a lot of new content, new music, sounds, adult animations and more than 230 new HD images!
Since this is the second Episode, as you might imagine, the girls won’t jump on you just yet, not all of them at least…
The story is developed even more as you get to know the girls better and meet the mysterious maid, Lemon.

SAVE FILE MIGH BE NOT WORK ANYMORE FOR NEW VERSION ESPECIALLY SAVES CREATED WITH MODS!

**It will fix crashes after making this selection

BugFix Image 12bss3 cannot be loaded (NOT NEEDED ANYMORE)
IMGBOX MEDIAFIRE *Rename it as 12bss3.jpg *For anyone that is getting bugs in the kitchen scene from ch12. This an issue with one of the images. This is the correct image just put it in the image folder in the game folder and overwrite. That should clear up the problem.