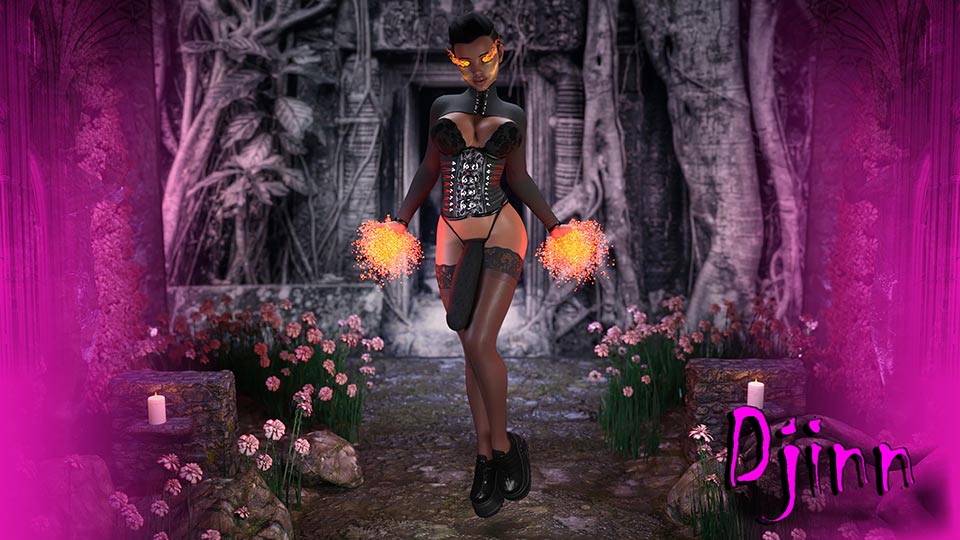 Djinn (Saga of the Gods Part Two) v1.07 by Nun Ya and Fallen Angel Productions, Djinn (Saga of the Gods Part Two) is a game about The MC is an ordinary girl, if ordinary girls had a dick and balls parked above their woo-hoo’s. The MC is also in her last days of high school and is on a field trip to an Egyptian art museum when she draws the attention of one of the museums longest residents.

The MC is lost and the Egyptian goddess Bast has taken a liking to her and decides to bestow her blessing upon her, with a catch. You see, the time of the gods is coming to an end. They have been forgotten and as a result, much of the power they gained from the worship of their followers have been lost. As such Bast has been reduced to the status of a minor deity, at best. She also happens to be a prisoner of the museum, her existence is tied to the Egyptian art exhibit and she has gotten very lonely. Her escape comes in the form of becoming a familiar of sorts for the MC, This is gonna be hard to explain when she gets home.

At the same time, the MC’s (Mother) is having trouble at home and at work. His wife no longer shows any interest in him and their love life has become non-existent. Also he has an incredibly dangerous boss. He happens to be a bookie for a crime lord named Kingfisher, but like a dumb-ass he has been skimming the books. It’s something that he is going to pay for very soon. The thing is that his new debt is gonna be paid by his wife and (Daughters) in his stead. It’s up to the MC to step up and become the new alpha or let her (Mother) deal with it, as long as you have no problem with her becoming Kingfisher’s piece of meat. And believe me, Kingfisher likes to share his meat.

Changes:
Removed the avatars in the lower left corner.
Recreated the world map and navigation system.

Warning: Old saves will not work, sorry. I changed some of the variables to reduce grind and simplify the script as it was getting a bit to confuddled.

Landlady Abduction Aftermath Conversation. (Triggers in the evening when the Landlady is in her room reading.)

Morning Sex Busted and Sharing Conversation. (Triggers in the morning after the kitchen Sex.)

Dev Notes
Note that the ntr in this game is entirely optional each choice in the game will tell you if it leads to ntr or not.
Also the Incest patch works for both Djinn and Shade I tested it myself with no issues.
This is a warning for the Android version we used ren’py version 7.4 so don’t use PC or Mac saves because if you save the game if the text box is shown if you do it gives you an error we won’t be able to help you if you get it it’s a problem ren’py has to fix.
Some users anti viruses are detecting this as trojan it’s a false positive if you’ve played ren’py for as long as most people you’d know that anti viruses have always given false positives to ren’py games ignore what the anti virus says it’s a false positive add it to it’s white listed apps.
Images

Due to changes in the code there is a chance saves won’t work for some people.

A Man for All [Ep.7 + Walkthrough Mod][Venus Waltz]

Away From Home [Ep.1-16 + Walkthrough Mod][vatosgames]