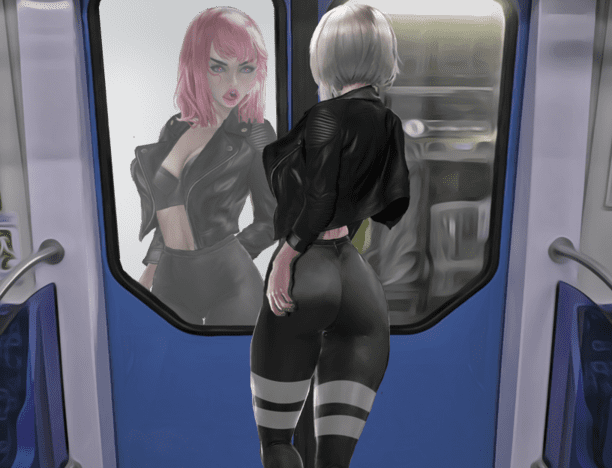 Defenestration v0.4.9.1 by Fresh Mulan, “Defenestration Game is set in a futuristic soviet union, the player takes up a role of Kira, young promising girl fresh out of school. Help her get on her feet in unfamiliar megapolis, dealing with various day-to-day problems and different characters. Some will try to help you, some to corrupt you (mainly the second one).” “The game is planned to be choice based and semi-open worlded. Which means no combat system. Current version has at least five hour of gameplay.”​

2dcg; Corruption; Female Protagonist; Mental Changes.
Installation
1- Extract to desired location.
2- Click on “Game.exe” to start playing
Changelog
v0.4.9.1
–116 new pictures;
–30 pages of script;
–Random npc ”Technopriestess” (dressed);
–Random npc ”Technopriestess” (nude);
–Random event “Priestess-pillory”;
–Repeatable version (male partner);
–Repeatable version (female partner);
–Initial BE remade a little;
–Initial “bust call” blink issue resolved;
–Minor grammar fixes;
–Intro event queue bug fixed.
Req: To make things easier and due to the lack of random events right now, it has 100% spawn chance and zero requirements (temporarily). Just interact with a new smaller pillory near the center of the “Vivarium” location.
Note: The repeatable version has a 50% chance for a male or female partner with minor text differences to spice things up. The event was written with every possible mental and physical alteration in mind (including stockings), both currently present and future ones (when Vivarium will be completed). So we won’t have to redo it.

v0.4.8
-New village/town – Vivarium.
-New quest.
-New outfit and its revealing version.
-Four new characters (Including a historically accurate character art for “Napoleon”.)
-Two new fetishes that will affect the game overall – Pregnancy and lactation.
-“Personality test” to turn them on/off.
So far they partially change the narrative of the quest, appearance of one of the characters and add one extra event specific for “lactation” (uses the same art, so it’s fair for all routes and preferences).
-Kira’s character artwork was partially re-coded to support new changes.
-Word-building mini-events
-Character art of “imperator” was added to the groping system and immediately used for “sexposition” (mini groping event).
-One new event at the church for everyone (text adjusts to turned “on” fetishes) and one lactation related event that uses the same artwork (co-written by Lostraven).
-The overall script for all routes is 182 pages long.
-Prison outfit can now be found in the dumpster near prison.

v0.4.7b
This update focuses on fixing what we knew – bugs, unintuitive quests and art in some events
– Fixed crashing issue (hopefully);
– Started implementing “night” to the game – use a dorm alarm clock.
(So far you can only steal liquor for Party Quest as an alternative way of starting it, and there’s a small interaction at the gym);
– Added information on how the “night” will work to the first interaction with an alarm clock;
– Small interaction at the church that can also lead to your arrest, or it can give you minor boosts (one time deal);
– Edited the artwork for the following events (basically half of our events were changed in some way – 197 pictures):
New You “dream”;
Party quest Katya version;
Party quest Tolstoy version;
Katya pole event;
Chief Officer events (all 4 of them)
Intro Breast enlargement event;
New You Breast enlargement event;
Prison shower event (first half)
(Every “other” event that uses Kira’s frontal face – Red Kira etc.)

v0.46
-A ton of backend systems that actually work this time.
-fixed fps issue (I hope)
-compressed most of in-game assets
-remade bust layering (mostly cut)
-remade “New You Breast enlargement” event to give you an opportunity to reduce or enlarge Kira’s breasts from any currently implemented size.
-Dialogue changes all over the game
-Minor and major edits of Kira’s character art.
-Some new character art for the npcs
-New You quest finale (120 pages long, but it has a lot of choices, so I have no idea how long it will take you to finish it)
-“Jammer” actually does something now, it blocks fetishes (it will ask you first) and is also required for something else.
-Remade diner job, you can now pick between the two of them.
-One new hypnotic event + fetish
-Three gloryhole H-events (one exclusive for dumb Kira’s, uses the same art)
-One non-H scene for a particular choice in new quest
New events support alternative text (lust, int, charisma) and all currently present physical changes (lips, breasts, hair).
Replaced art in:
Park exhibitionism
Park “Bobby Fisherman”
All of the Chief Officer’s sessions (four)
Subway random event (requires casual outfit and hypnosis, has three sub-events)
Vasilissa random event (red square mall – exclusive for bimbo characters)
“New you” breast enlargement event
Prison shower
Prison pole
Legion 1