Corruption of Champions II v0.5.23 by Savin is a game about There are many, many worlds. One, called Mareth, was perhaps the heart of them all. Cracks in the space between worlds, called portals, all seemed to lead there. Many portals led to Mareth, but none left it.

One sacrifice came from the village of Ingnam. This so-called ‘Champion’ was but a pawn in the village elders’ long plot to extend their lives, but the Champion escaped her fate by beating back the demons’ minions waiting on the other side of the portal, and set out on a one woman crusade to bring an end to the Demon menace once and for all. That was a year ago, and a world away.

You have never heard of a world called Mareth, nor a village named Ingnam. Nearly a year ago, you set off on your own, leaving your former life behind to seek your fortunes on the wild frontier — a year of traveling, exploring, fighting, and surviving alone. You’ve earned yourself a little coin in your travels, enough to book passage to the furthest reaches of the known world: the Frost Marches.​

Installation Corruption of Champions I
1- Play Online
Or
1- Right click and save as
Mac Instructions
You can play it with any current browser, download the latest and open the index.html from CoC2_028/resources/app/index.html
Changelog
v0.5.23

v0.5.21 Patch Notes:
Viviane, the witch of the woods, has a new questline that ends with her recruitment.
Bring her some succubi milk to investigate its magical properties, and she’ll pursue that with all the rigor of a mad mage. (By Balak)
Bunch of bugfixes.
New busts for a recruited Viv (by Moira)

After having finished Gweyr’s third dungeon, you can now approach Imora and undertake the siorcs’ challenges below the waves. (by SomeKindofWizard)
After finishing the Temple of Challenge, you can freely explore Starhome and interact (sexually) with several of its residents. (by SomeKindofWizard)
Doireann can now give you a lovely titfuck. (By Wsan)
You can now summon Talsenne from the Wayfort’s Summoning Circle (after buying it from Evergreen, and of course acquiring Talsenne from the Ring of Fate quest) for some lewd fun. (by SomeKindofWizard)
New Busts: Shaman Seastone (by Sulcate) and THE DREAD HYDRA (by Moira)
New CG: Shaman Seastone on her Throne (by Sulcate)

v0.4.40
New scenes: Kasyrra Suck & Fuck — accessible from her Dream Palace sex menu; Brint kneeling doggy-style (by Wsan); Livrea Pussy 69 (by Skow)
New NPC: Kaina. She can be found in the Glacial Rift and has a small quest attached (and more to follow). (By Skow)
There is a new option for sending error reports. It is OFF by default. There is an AUTO setting that will automatically send error reports when errors happen, or a PROMPT mode which requires you to hit a Report button from the crash screen

v0.4.31
After sexing her, you can now find Daliza crashing in your bedroom at the Wayfort when you try and sleep — thus unlocking the ability to sleep with her at the Wayfort as you please!
Speaking of which, there’s now a bedmate-choosing UI that lets you pick who you partner with and where (Frost Hound, the Wayfort, and at camp). Dal’s currently the only person who’ll sleep with you at the fort as far as I know, mind you!
Khor’minos Main Street has been expanded to include a tavern with a pair of sexable new NPCs, an alchemist and a mage (with several new items), and a minstrel. The salamander dickgirl bar-babe even comes with a new PC pregnancy!

v0.4.12
There’s a new group of minotaur soldiers in the Outskirts you can have some fun with — in more ways than one! (Written by Wsan)
You can meet a new group of furry adventurers in the Outskirts with a one-time scene. You’ll see more of them later in the city! (Also by Wsan)
New busts: Tandi, Sherine, Adventurers (Lessala, Vicky, Yani)
New CGs: Patting Mai, Patting Kohaku

v0.4.11
A group of centaur can now be found plying their trade in the Outskirts. Poor girls gotta make some coin somehow in these trying times, and they’re all outta rustic handicrafts… (Written by Wsan)
Ambra, a catgirl merchant, has also been added to the Outskirts. (Written by Tobs)
A nearby Lupine merchant named Nash has a bunch of twisted transformation items to sell, with more planned for following patches! (Also by Wsan)
New busts for half the centaurs, by Moira. Rest should be done next patch!

v0.4.10
You can now bump into Calise on the main street of the Khor’minoan outskirts. She’ll send you on the first part of the main story quest in the region (if you can pry your face out of her muff anyway).
If you’re on Kas’s Romance path, you can now access the demoness’s home any time after The Winter City. You’ll find it in the Ways Between, north of the Foothills (and her WC dialogue has been updated to reflect the changed design). Enjoy repeatable scenes with the Demon Queen — and there’s gonna be a LOT more to come in the palace when we’re not balls deep getting Khor’minos up and running. Note that you can also LOSE access to it if you fulfil certain criteria. Kitsune.
Bunch of bugfixes for companions and powers being all jacked up. Whoops!
New Busts: Livernus the Boatman (we’ll get his wang color fixed when the artist is feeling better) and demonic smugglers (by DCL); CaliseQuest’s devilish boss by AnonArts!

v0.4.8
You can now ask Ryn to sleep with you at night. I comm’d the excellent Alypia for this and she delivered like a whole novel’s worth of elfu snuggles (Also, coded by Squishy!)
After defeating the Undermountain kobolds a few times (or with a little help from your friend Lyric), you can now be invited to the court of the Kobold Queen. (Written by Gardeford!)
New Bust: Kobold Queen.

v0.3.36
You can now finish Cait’s quest, Cat Call, by taking her to the ruined caravanserai in northern Harvest Valley. After the quest, you’ll get a new set for the catgirl, a bunch of new talks, and finally the opportunity to take Cait’s anal virginity (and then take that ass over and over). Alternatively you can enjoy an excellent bad end written by Wsan if you fail the quest! There’s more of her post-quest content coming in the next patch, including a bunch of new sex scenes by Tobs and the ability to turn Cait into a half-leothran like the twins!
You can meat Imora, the siorcanna shamaness, in all her glory up in the Rift. (By SomeKindofWizard)
After returning to the ruined Wayfort for the first time, you’ll be introduced to Bailiff Daliza of the Winter City and be given an opportunity to legally assume control of the fort (as well as in reality with or without Ryn’s help). This is meant to be part of the same event where you meet Jael’yn and Farrah there.

v0.3.32
Miko & Mai have a new suite of sex scenes (incl. Arona 4some) (Written by TheObserver)
Lyric has had some bug fixes and adjustments (preg should work properly, cooldown and damage reduced and can’t crit, electrum should max out and reduce over time correctly)
The messed up status icon/inventory/equipment UIs on certain screen resolutions should be fixed
New talk scene with Kiyoko/Kinu once they’ve been freed (Written by TheObserver)
Lusamine/Cait have a new scene (Written by BubbleLord, coded by Squishy)
You can return Elthara’s scythe to her
We’ve started an effort to make Kiyoko/Kinu respect your spousal/parental pronouns, please report any incorrect ones that you still encounter!
New Codex: Dryad
New Hime Kinu CG that can show up sometimes when you interact with her
New Busts: Ogrish, Synneva (Friendly), and Meira (Cocked)
Fixed Syrish bust (she has spots on her clothed now too)
As always, you can become a backer and support the game’s development on…

To activate the code, right-click the game in your Steam library, click properties, go to the BETAS tab, and then enter the code. Then select “backer” from the dropdown.

v0.3.16
-You can now finish purifying the Hornet Hive! Talk to Liaden at the honey pool after defeating the corrupted Queen and the Honey Goo, and she’ll walk you through it.
-Alternatively, you can be a dick about it and mess the whole thing up for everybody.
-n.b. due to a miscommunication on the writing team, if you go the Corrupt route for finishing the hive, we’ve temporarily disabled Queen Nyzerrah’s interactions until we repair some conflicts in the writing. Whoops! Should be fixed in the next couple patches…
-After purifying the hive, you can (briefly) meet Liaden outside the Frost Hound and finally walk her over to meet Brother Sanders like she came here to in the first place.
-Berwyn got a small expansion: sleep with, companion talks, missionary sex, and a new dream.
-New Enemy Encounter: Selkies can now be encountered in the Glacial Rift!
-New Dream: Rainbow Cait
-New Busts: Dryads
-Sex Toys are now key items, rather than inventory items.

As always if you like what we’re doing, you can support development on…

MAC INSTALLATION
You can play it with any current browser, download the latest and open the index.html from CoC2_028/resources/app/index.html
Images 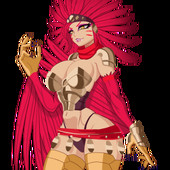