Cloud Meadow v0.1.2.2d Beta by Team Nimbus, Cloud Meadow is a game about a hybrid farming sim dungeon crawler, where the player can choose the solitude of a quiet sky high farm or the rushing adrenaline of a raging battle inside abandoned ruins, both of which benefit one another.

Experience thrilling turn based combat versus a variety of enemies, using your own raised monsters, allies and an array of skills. Explore a huge variety of locations and hidden areas throughout the ever expansive world of Cloud Meadow.

Among the three major towns the player will be able to fully navigate through it to discover quests, new npcs , stories and the lore behind the game. Farm to your hearts content and exchange your produce for goods and services, complete quests and raise your farms production! Breed and discover a large variety of monsters whom you can breed with one another AND breed with!​

Fixed issue where party members weren’t being cleared when returning to town. This fixes a related issue if one of those party members is subsequently removed from the farm (sold, graduated, unhappy)
Fixed missing icons in guidebook
Fixed Female Centaur x Crab sex swapping palettes on the farm
Fixed issue with transparent monsters on the farm
Fixed closet UI not having a character limit for renaming the player
Existing saves truncated to current limit (10 characters) on conversion
Fixed unintended input handling (enter/spacebar opening menus, joystick input being read)
Fixed issue where monsters located barn could fail to find a sex spot, triggering related exceptions when interacted with
Fixed issue where Jerikan (monster merchant in town) was not preventing player from hiring monsters when farm was full
These extra monsters (which cause exceptions on the farm) are removed during conversion
Fixed issue where player’s could purchase/hire when they did not have enough Korona (going into infinite debt)
All debt is being erased (korona set to 0) during conversion to this version
Fixed issue where monsters in merchant stocks (Jerikan) were not initializing correctly, which could cause exceptions when viewed to purchase
Fixed bug with leaving input field blank on transaction and cooking menus
Fixed bugs with inventory updating for new items gained by working monsters (time passed with manual refining)
Fixed issue where exception triggered during new save data initialization would soft-lock the game during load (prevent loading screen or exception dialog from appearing)
Fixed issue where player could sell breeding monsters to Montalvo, triggering an exception on load, or when returning to farm
Only idle monsters are now able to be sold (can’t be sleeping, working, pregnant, etc)
Fixed issue where inventory window didn’t block clicking on menus behind it (could interact with party select window behind it)
Fixed issue where usable inventory items (like bundles) would not be cleared when stack was used up
Fixed female holstaur idle animations being the wrong directions
Fixed the storm clouds on the farm and in Cloverton
Fixed bug with resolving active ingredients for a selected recipe when recipe needed to start with a mix of qualities, to be able to cook (would show as 1/0)
Fixed hatching tutorial event triggering when the player didn’t have enough room on the farm to hatch an egg, which was soft-locking the player on the farm
Fixed bugs with Chimera passive traits
Fixed Steam players stuck in “god mode” (since accidentally given access to menu, and after update, can no longer turn it off)
Fixed issue where special patreon contest monsters were not initializing their base stats 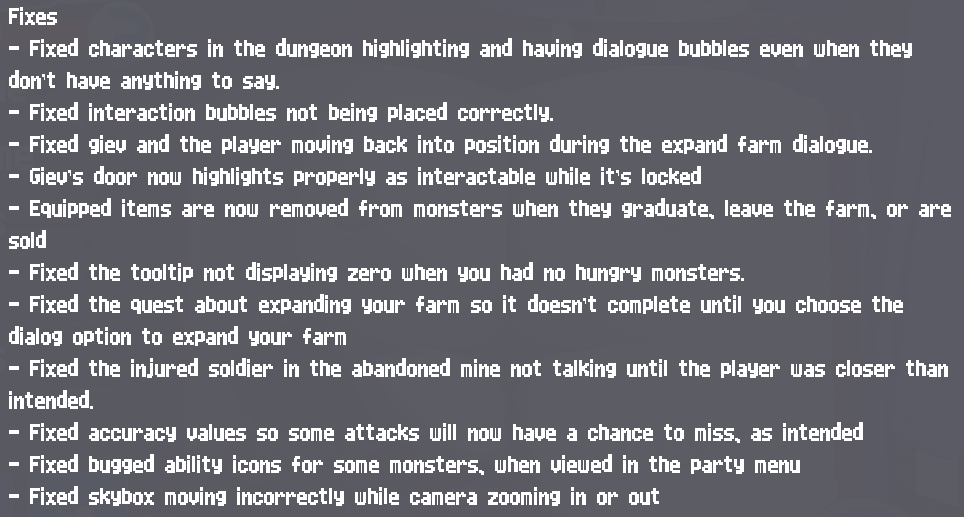