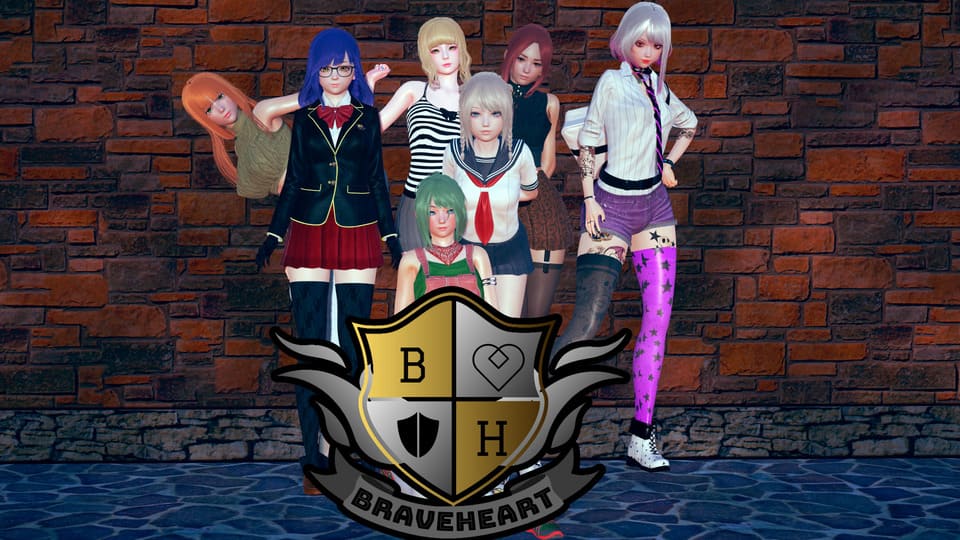 Braveheart Academy v2.0 by Chrys, Braveheart Academy is a game about You’re a college student enrolling in the prestigious International Braveheart Academy. You’re able to pick your starting stats that suit your character the most!
There’s also the ability to pick the year you’ll be starting, causing you to have different classmates and different homeroom teachers!
Although you can meet every girl in the game even from other classes, the ones from your class will always appear more.
Its core gameplay will be you, the main player interacting with characters to get to know them better.

ALL FORMS OF PUZZLES THIS GAME HAS CAN BE TURNED OFF IN THE OPTIONS.
THEY ARE ALL OPTIONAL.

You’d have regular encounters and those encounters as I said will have questions, answer correctly and that affection with that character will rise faster!
You’ll have longer and more meaningful encounters called Special Encounters in which you would have to at least get right more than 50% of the questions.
Then as you grow the relationship by getting to know them, you’ll find that Special Encounter! Those feature a sliding puzzle minigame!
You have to complete it under a set amount of time.
These encounters are bigger and have a significant impact relationship wise.
The puzzles would get progressively harder from 3×3 to 4×4 and even 5×5!
The game is going to have stats that you can improve so you can complete puzzles easier and better!

Changelog
v2.0
UI Updates:
– Calendar completely revamped.
(Now only has 10 days, but 6 months!)
– Contacts completely revamped.
(It will have all the characters you meet, and will be updated as you progress through the story!)
(Now it opens on the current Month.)
(The Event Days are clickable instead of hover.)
– 17 More break time images!
– Now you don’t have to use your fingernail to hit that pesky skip day button!
(All Button Hitboxes increased by 125%)
(Slight adjustments)
(Now has Night Variant)

Almost triple the size of any patch!
With this the game is considered complete and has a total of 8083+ Renders and Animations!!

-Sofia’s Story has been completed!

(Her final arc spans over 6 events!)

-Etna’s Story has been completed!

(Her final arc spans over 6 events!)

Teachers have been introduced!

(To unlock them you’ll have to progress within Sofia’s story!)

MARY HAS A SPICY TRAP VERSION!

There’s a regular female Mary and if you’ve selected TRAPS within the game’s opening sequence, Mary will be a trap!

You’ll be able to select Passive or Active sex style on this event for the Trap section!

Eshe Bishara has been added to the game!

Sonechka Volkov has been added to the game!

(This was suppose to be two different events but they were merged as they fit much more naturally together, and adds a bit of variety to the timed events structure.)

An NTR Bad Ending Event has been added to the game!

[Completely sponsored by Frezal, one of the game’s biggest Patrons!]

The requirements for this bad end are the following

-Ignore Raven’s sign to stay away within her story.

(IF YOU’RE WEAK OF HEART DO NOT SEE THIS, NTR IS NOT FOR EVERYONE)

– Homeroom no longer exists, since there weren’t many tips to be added.

– To take its place, 15 CG’s were made that show up randomly, on some days of the week as a nice bonus!

– Shop update has been completed.

– Mika Event can now be done in a single clicking session.

– Removed Strength and Intelligence from the game.

(Not Used, was an early concept.)

– Fixed some flickering between animations.

– Map has been visually upgraded.

– Small character icons now show up besides the location instead of a generic “!”

– Locations now appear at all times, if they are unaccessible due to story locked locations they will show up with a “?”.

– Home can now be accessed from within the map during the day.

– Home now has the “!” icon warning that you have people within the city you can meet.

*(This is helpful if you want to skip days faster.)*

– Redid all the buttons, the other ones were bad.

– Now a Locked Icon shows up if you have yet to unlock that scene.

– New Cards for every character.

(So you can check the babes out before going on the Meet N’ Yeet.)

– The default version, will only show you two characters that will always be random.

– Premium Meet N’ Yeet has been added to the game and is purchasable In the shop.

(It allows instant access to everyone, that isn’t story locked.)

(Currently, there are only two MnY’s that are story locked, those being Azalea and the new upcoming Russian Sonechka.)

Easter Egg Events!
(I won’t tell you how to get this, so good luck!)

Gameplay Changes:
Easy mode added!
If you’re a beta and want to take it easy now there’s a mode for you!
(You get more money weekly and events don’t skip time!)

Timed Events now auto-start!
(They now have also the ability to be on a specific time of the day!)

Artoria Pendragon added to Meet N’ Yeet.
(New +104 Renders 28 of them are Animations!)

[A lot of sexual content. A lot of Sex. A lot of Animations. Have fun.]

Smaller QoL Updates
– Tutorial has had its pictures updated to reflect the new UI.

Bugfixes:
– Fixed several grammatical issues.
– Fixed a bug where the final puzzles weren’t being 4×4.
– Fixed a bugwhere the last event of Sofia/Etna/Viviana could not be viewed after completion.

Update 1.8 brought a fucking grand total of 969 renders, 313 of those being animations!
To a total of 3972 Renders and Animations combined!!

– Skipping time animation reworked!
(Now tells you the time of the day you’re going to)
(And when you sleep it now tells you what day it is)

– Hisako model fully reworked!
(Hisako got the visual update she needed, the skin is now 4K and her hair is now true to the original.)

– Hisako’s Intro entirelly redone!
(With a new extra animation when checking her out!

– Updated and tweaked the Meet N’ Yeet ad popup.
(Has a 1 in 5 chances of appearing per day, also includes hisako’s new model.)

– New Lower Class Event!
(You’ll start without a phone for the first couple of days and will be given one by Hisako herself!)

– Meet N Yeet error messages!
(Only available on weekends & cannot use again in the same day.)

Lyra Sexual Event – Emergency Timber!
[29th Of March](New +29 Renders 11 of them are Animations!)

– Azalea Blackwell added to Meet N’ Yeet
(New +62 Renders 28 of them are Animations!)

Updated Content!
– Meet N’ Yeet has been updated to its final look.
(Its a tinder-like app that will allow for quick sexual interactions)
[2 new characters cards have been added, they are available to check]

– Sophia is now called Sofia to better match her story and her background.

– You can now see the gallery as memories!
(Allows you to replay the events themselves)

– Viviana has 3+ new Encounters!
(New +109 Renders, 19 of them Animations!)
[Viviana is a very wholesome relationship, so no H content]

Bugfixes:
– Fixed several grammatical issues.
– People popping in and out between events/just checking locations has been fixed.
– Completing the puzzle now gives 250Y and on the first try gives you an extra 175Y.
– Credits screen has been fixed. (Undocumented from 1.5)

Updated Content!
– Meet N’ Yeet has been updated to its final look.
(Its a tinder-like app that will allow for quick sexual interactions)
[2 new characters cards have been added, they are available to check]

– Sophia is now called Sofia to better match her story and her background.

– You can now see the gallery as memories!
(Allows you to replay the events themselves)

– Viviana has 3+ new Encounters!
(New +109 Renders, 19 of them Animations!)
[Viviana is a very wholesome relationship, so no H content]

Bugfixes:
– Fixed several grammatical issues.
– People popping in and out between events/just checking locations has been fixed.
– Completing the puzzle now gives 250Y and on the first try gives you an extra 175Y.
– Credits screen has been fixed. (Undocumented from 1.5)

New Gameplay Content!
– Meet N’ Yeet has been introduced!
(Its a tinder-like app that will allow for quick sexual interactions sex and service of course best of both worlds!)
[It has a demo of it on the phone you can test it out yourselves]

– Bi-Weekly Polls for girls to be added to Meet N’ Yeet will be available for patrons.
(5 girls will be shown, top 2 gets in, the 3rd shows up again on the other poll and the others will be deleted)