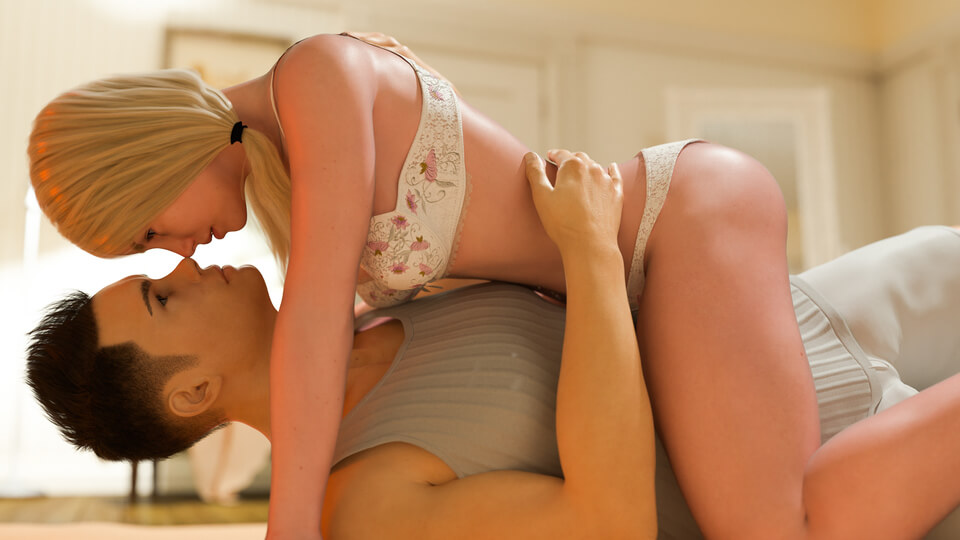 In Alison Fall of the Apple you play a highly trained military veteran who has been working as a cop in NYC since the disappearance of his pregnant wife 7 years ago. After saving the life of a young woman named Alison your life is thrown into chaos with thugs, hitmen and the corrupt elite of the Big Apple trying to hunt you both down. With lives on the line choices will matter and decisions will have major consequences, for you and for those around you.

Alison FotA is essentially 3 games in 1 where you will find major differences in both story and characters depending on whether you choose the Love, Dom or Harem route with no render repeated on another path.

0.7 (Love path remaster)
Additional content has been added to the previous remaster of the prologue, bringing it all the way to the three-way split, now. Over 340 renders and 6 new animations made the cut this run. Additionally, this update brings with it the very first OMVN-Oscar-Six (First dev-team member) Gallery mod included with it.

v0.6.5
Long awaited update to the Harem route
Over 300 new renders and 10+animations

v0.6
This is the long awaited update for the Love route
It includes over 300 renders, 10-ish animations (he lost count 🙂 ) and a new path within the love route that I’m sure a lot of you will be happy with :smirk:
There’s also been another 100+ renders and 2 animations added to the remastered prologue.

v0.5.6
I have officially started work on the remaster/partial remake of Alison. This is RM1 = Remake pass one. The prologue has been reworked entirely in Octane. This was done to keep up with the rest of the game in terms of quality and to fix a lot of the discrepancies in character looks from opening to the three way choice. I intend to redo this entirely up until the three way split. Work will continue whenever I can spare the time in between projects. OMVN
130+ renders all at the start

0.5.5 part 2
Last update to the Dom Obedience path of the current cycle.

v0.5.5 part 1
Continuation of the dom path, over 100 renders and 6 new animations. This is part one of two. Part two is coming out at the end of this month or March 1st. Also, the android build has now been added to patron monthly releases.

v0.5.1
Added a few new renders that did not make the cut for 0.5, fixed typos and bugs. In addition, I’ve added the choice to skip the entire prologue and go to the three choice menu: Love/Harem/Dom any further and you would miss points, likely break the game worse.

Guide Domination Path
PLEASE FOLLOW INSTRUCTIONS!
If you decide to play the latest build of Alison, Choose either affection points all the way, or “Unleash the beast option.” Followed by more obedience choices when prompted. Whether you like it or not, the content is created in such a way that it requires said choice to be made. Otherwise, you will end up with a broken mess. So if you don’t want to play the obedience side, then choose only affection and that’s it. If you want to unlock all of the content, then choose what you’re supposed to  You need 10 obedience points to unlock the path initially, and 15 in total to unlock all of its content.
Images

Download For Win/Lin
MEGA GOFILE DROPMEFILES MIXDROP NOPY
Download For MAC
MEGA ANON GOFILE MIXDROP NOPY
Download For Android
MEGA GOFILE MIXDROP NOPY
Harem Patch
MEDIAFIRE *Please use this to overwrite the current .rpa file inside the game folder. Then follow these steps: Load a save for the current Harem VI update and immediately create a new save as soon as you have loaded in. This should get rid of the “unassigned variables” In the rare case they still persist, then please start a fresh game.
WALKTHROUGH
MEDIAFIRE
WALKTHROUGH MOD
MEDIAFIRE *FOR v1.0 **Extract file from file to the \game folder
Download For German Translation (FULL GAME)
GDRIVE or TRANSLATE ONLY *Translate only just paste it to the language folder