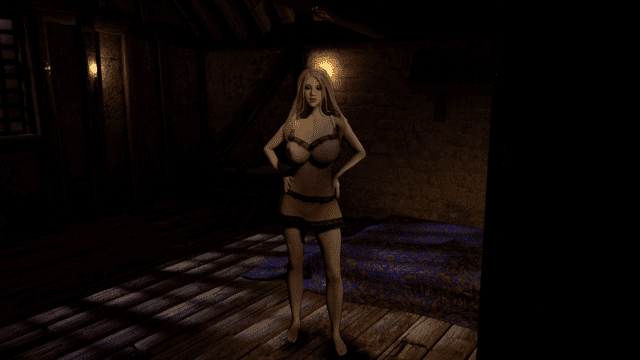 Will you become like the others in this corrupt society? Or will you stay true to yourself and find a way out of the chaos that surrounds you?​

This update really pushed me to my limits. Don’t expect me to do anything similar in the near future again… Also looking back it was a stupid idea to work on these many story branches in this short time. I did it of course so that you can now choose instead of having to wait until eventually Liandra wins the content poll again. Still, if I had to do it again I would probably make a poll which route you want to see first and then focus on that rather then do them all in one month.

This last update had a lot of branches with different dialogue depending on the route the player has chosen. I’ve also added changed dialogue for Yasmine & Julia should you first interact with them after you already started Liandra’s quest since then her previous dialogue wouldn’t make much sense anymore. There is still more to do in that regard, but that’s why I planned to do a 2 month update for this story part from the beginning.

For testing: I’ve changed the respawn rate of monsters and items on almost all maps (not the mine and swamp) to 7 days. The reason behind that is that the original respawn time of 3 days was a good thing when there wasn’t that many areas.. Now that the game has a lot more maps it often feels to me like you get bombarded with trees and no matter where you go there are too many enemies. I’m looking forward to your feedback, If you think the respawn time is too long I can adjust it of course!

So About the new stuff:

Reworked the mayor’s mansion (3maps)
Added 2 new maps
Continued Frisha’s story (see spoiler if you can’t find it)
A new scene for Nyra
Yasmine’s and Julia’s bonusscene from last month
Saves from version 0.3.9.5 and after that work for this version! Just copy over the save folder from the old version (there is also an explanation for that inside the game’s folder)

Spoiler
I won’t have time to update the walkthrough for this update, but here some clues on how you can progress the new content:
For Nyra’s scene: you have to talk to her and after she agrees to cook for the tribe Fuck 3 of the 4 women next to the fire when she is cooking. After that ask for a second bowl of soup.

For Liandra: After completing Frisha’s content with Dave listen again to Dave talking to his father in the morning/afternoon.

For Yasmine:
To see the new scene you must have had sex with Yasmine 5 times and her corruption has to be 6+ then when having sex with her change position until Giron walks in on you. You can then satisfy her or leave without fucking her again (she will then take the next best cock to satisfy herself.. Only in ntr on mode)

For Julia:
To see the new part with Julia you have to complete her previous content and then complete John’s quest up to the point where Julia came in to serve tea.
After that you can talk to her in the kitchen again to start a new quest around her
(important: if you told her to improve with the butler you have to watch her while not disguised and then overstay so you get punished, after that you can confront her in the kitchen)
Everything after that should be explained in the questlog.
I’ve also added an animation for the scene when she licks Yasmine in the livingroom .

Lyvia’s quest isn’t finished yet. Thanks to your votes I will continue to work on it this month and do my best to bring it to a satisfying end. There will also be reworked/new content for Ayita and by the end of the month a bonus scene for Mira.

v0.3.0.5
Chopping wood/mining/farming costs can now be reduced with the constitution talent (current max 10)
New animations for mining + mining now gives stone and there are random copper spawns in the deep forest every 3 days.
Reworked Emily’s house map
New option to change combat animations speed (options>visuals)
5 new animations for Emily, although for many of you that will count as 3 (not all of them sex scenes)
The bonus scene for Claire (She needs to be at 10C, Talk to her outside the inn)
You can continue Emily’s story. Mira must be in the church to do that! Then just talk to Emily when going to bed, every other info should be in the questlog
Fixed some bugs that have been reported over the past weeks. Also added a few new lines of dialogue to Hiba’s outdoor scene and fixed it. Also you can now rent a room at the inn even if you worked there before… Can’t recall all the other things.

This update includes the bonus scene of last month for Yasmine ( 0.2.7.3 )

Quick guide how to see the scene

Yasmine must have corruption 6+ and you must have had sex with her at least once
Talk to Julia when she’s in the kitchen so she is added to your relations
Talk to Yasmine when she’s in the livingroom (7am – without Julia, 8pm – with Julia)
When she asks you if you will come and visit her later on you can now choose right now
If Julia is in the room (8pm) she will now watch you closely if not the dialogue will be ofc without her presence
If Julia watched you you can talk to her when she’s in the kitchen the next day
You can now either choose to give her hope or don’t do it (If you don’t then there is no more content with her)
Now talk to Yasmine again at (8pm) and continue afterwards

Currently crops need 10 days to grow (if you water them every day, it’s a bit hard to weight that correctly at the moment because a fitting weather system isn’t implemented yet. Something I want to add in the future) If you don’t water them they will also grow but will take double the time. After that you can in case of wheat make flour out of it that Penny will bake into bread. In case of the other vegetables you can give them to Penny and she will sell them to earn more money. Her money is stored in her house and I plan to offer new buy options for her in the future.

Because of these new vegetables I’ve removed the old vegetables from Lucius shop (this was a placeholder anyway) Emily will now accept the new vegetables for her cooking. By doing this I also wanted to make food a bit more important. I wanted to give the option to roast meat over the fire in this version but I just ran out of time and focussed on getting Penny’s story started first.

So what else.. I’ve added a new animation when you cut trees (wanted to give it a bit more immersion) The ntr scene with Julia is now animated.. although I didn’t even test that.. so I hope it’s working.. And you won’t get kicked out of the house anymore if you watch it.

There is currently no scene for Penny in this version! Some images though and ofc the story. I wanted to take proper time to introduce Penny’s character, something I didn’t do enough for Arianna (at least from my point of view) My plan is to do all of the missing stuff in the coming week. so hopefully release next friday.. If I can’t make that mark I will let you know. There won’t be a WT update for this version, I will write the update to that next week when 0.2.8 is complete.

These past two weeks where almost entirely spend on working on the farming mechanics and daily routine and ofc drawing the new map + making fitting sprites and working on the locations to match in daz3d. Most of the dialogue was written today so if there are typos please report them also

Dev Notes
FAQ:
After having a discussion about ntr here already (page 4) I want to clarify so that you don’t have to search:
Currently there is Netorare content in this game, which you can avoid OR turn off at the start.
There is also netori content in the game that you can play even if you switch ntr off.

Incest?
There is no incest by itself in this game. But if you read Marcus letter a second time (later in the game, Mira’s quest) you will switch to the alternative story and can change designations to what ever you like.

Please let me know if you encounter bugs so I can fix them for the next update.
This is a non linear game which makes testing for me allone difficult (you can be sure I do a lot of testing before each release)
But as this is a one dev project at the moment I hope you will forgive bugs if they happen and report them to me (if possible together with a savefile).
Thank you for helping me to improve the game!

Known issue:
– Sometimes after loading a save an error might pop up. normaly restarting solves the issue. I know this needs fixing and is on my to do list

Download For Win
MEGA GOFILE NOPY ANON
Download For Compressed Win (620 MB)
MEGA MIXDROP MEDIAFIRE *This unofficial version is not released by the developer, download at your own risk, it may break the game.
WALKTHROUGH & SAVES (v0.4.0)
WALKTHROUGH  SAVE *Saves info

Save 1 – Mixed NTR and Non NTR, specifically to watch Penny’s corruption scenes. Doesn’t have Imawyn’s content [Incomplete save]
Save 2 – No NTR, no futa and I left Penny route up till the point where you can begin to corrupt her. Imawyn’s corruption route(just slightly changes some dialogues). [Full save]
Save 3 – No NTR, no futa and I left Penny up to the point to corrupt her. Imawyn’s love route(just slightly changes some dialogues). Got the tainted sword from the prophet. [Full save]
Save 4 – No NTR, FUTA and I think it is a complete save too [Full save(probably)]
Save 5 – NTR save missing a lot of content with Tia’s and Kate’s NTR content unlocked. The MC possesses no rights over her wanita in this save as he lost against Dasan in a fight. [Incomplete]
Save 6 – NTR just before deciding if Sabrina’s virginity was taken or not. [Incomplete]
Save 7 – NTR with Imawyn’s love route. It is in the point in which you can take her virginity at the tent. After this you can go with either Lyvia or Tia to find the viking-looking guys and get some mini scenes if you lose. [Incomplete]
Save 8 – NTR with Imawyn still in prison(Virgin). You can begin to corrupt her or just ignore her and continue with the other NTR routes. [Incomplete]

2. Move all .json files into the ‘data‘ folder and overwrite.

3. In game, The Darkwood entrance talk to the guard and select Yes.

4. In your inventory “Key Items” an Cheatbook will open the Cheat Menu.