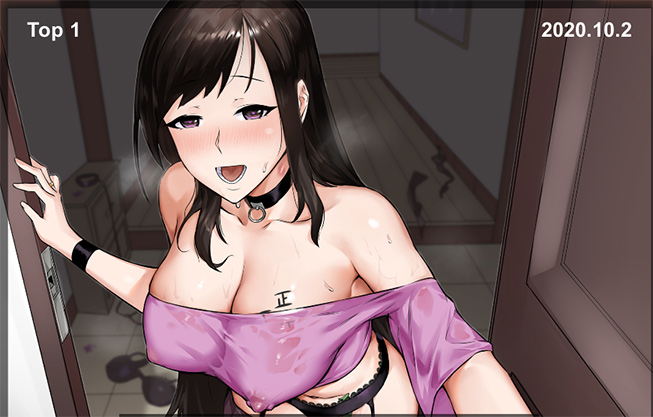 Ntraholic v3.1.3 by Tiramisu, Ntraholic is an adult by Tiramisu about Two years ago, Ntraholic is an adult game about Chiho and her high-school sweetheart decided to marry, cementing their long-standing love for each other with a vow. These two turtledoves spent each day since together, nurturing their commitment, adoring each other, and whittling the days away blissfully. But not all fairy-tales have happy endings, and this is no fairy-tale…

One day they received a letter, the rent was rising, and they knew they needed to find a new apartment. Luckily, your father, in his last moments, bequeathed you two apartments that were right next to each other; one for you and the other to make a living.

As fate would have it the young couple found your advert and came to stay. When you saw the young wife, you couldn’t believe your eyes. A massive chest, thicc hips, a shy innocent smile – how did that loser ever marry such a babe?

Corrupting such a true love would be hard – even for a scoundrel like you, you needed some “external help”. Luckily, like every bad landlord, you were friends with the devil herself: Lilith. Lilith had watched Chiho for a while, bored of her innocence, and so she offered you a deal; she would lend you some of her eroge powers so that you could break Chiho. No devil would offer a free lunch though, in exchange for these powers you have 90 days to turn this sweet housewife into an affair-loving slut or your soul would be taken.
Make no mistake, your life AND your libido is on the line.
Chiho may be pure now, but there lurks a demon in every angel.

v2.2.2a
Changelog:
This update mainly targets on fixing the bugs reported in last version and make some QOL improvement.
-.Both screen of 16:9 &16:10 can be supported now. If you are using an ultra-wide screen, you can consider changing your resolution in your setting panel, if wish.
-.Red hair guy conversation bug fixed.(Notice: To make this work you cant use any savefile before v2.2.1)
-.”Balcony sex refreshes the progress of alley sex” fixed.
-.Randomly very small window bug fixed. If not please contact us or you can change the setting in your regidit.
-.Slightly increasing the amount of lust gain in the latest events. Besides, slightly change the suspicion lowering rate in Balcony and Alley.
-.Some more intuitve game design is applied – adding “!” for key events in the night market, but still you are encouraged to explore the nightmarket
yourself because there are a lot to discover!
-.Autosave and more save slots. Autosaves happen every morning of the game. Please not that the current autosave will cover the last autosave.
-.Some more translation.
-.Shake effort in Alice stories.
-.As suggested, now the aircraft minigame can be one hand capable!!! – both space and left click of the mouse can shoot.
-.Help book is updated(More hints available now!)

v2.2.1a
The updates majorly happen at the night markets.
1. A whole new scene
2. A new skill
3. A number of trivial characters(majorly serving as ppl in the night market). Those ppl will provide you with hints.
4. A sub-female character and a series of mini-game related(conversations will be added soon).
5. A new mechanism for your day30-60(About Shota).
6. Some DOL improvement. Slightly improve the money you can get from the delivery game and I will shorten it while ppl are testing.
7. Dinner talk-so that player can know more about the couple.
8. Translations!(Chinese,Korean,Japanese). The translations did not cover the most up to date content and they might have some flaws. We will have our translator cover them soon(1-2 weeks).
9. The doll on the bookshelf is now interactable.
10. A lot of other updates… too many to be recorded.

Characters:
Chiho: An innocent wife who loves her husband dearly. She was very popular in high school, with many boys interested in this sweet girl who had “developed” early. It was here that she met Shota and decided that she wanted to spend the rest of her life with him. As the economy had struggled recently and Shota wasn’t bringing in much income, she was desperate to help with the financial burden. She agreed to help Ryunosuke with housework in exchange for him lowering the rent a bit.

Shota:Chiho’s husband. He works in sales, however, is a shy man, who lacks the character for promoting and selling products. To meet his quota, he often has to work late and have long business dinners with customers, leaving his hot wife alone at home… sexually unsatisfied and defenceless.

This walkthrough ignores steps like grind for cash since that’s implied if it cost money and won’t detail some minigames unless it seems like missing an aspect might prevent progress.

1. Buy tear of sin (super useful in many sex scenes)
2. Call her over to cook, Do the speech bubble till you exceed the bar and then do the touch without going over the bar on the suspicion meter to unlock the vibrator. Make her climax once to unlock groping option. Make her climax once more while minding the heart rate to trigger a scene.
3. Buy 1 choc/win and (hangover soup optional)
4. invite her over for tea, finish the event successfully.
5. buy and install spy camera (scene trigger)
6. Call her over (scene trigger)
7. Invite her over for H 3 times. 1st time it will end after 1 climax, 2nd time it will end as early as 3 climaxes as long as you are doing at tier 2 position. 3rd time it will end after 1 climax and trigger scene as long as you do any tier 3 position on the bed.

At this point you have achieved your first bet and Lilith will visit you during the night phase to unlock new features, but they are not tied to the next goal you have to meet, just fun distractions, and will not be required till step 11.

8. unlock bell by farming 200 dark energy (aka lust). This is a good time to grab any pics you haven’t yet because max you can gain is 15 lust per session for 3 climaxes, position doesn’t matter. This can be increased to 25 lust per 3 climaxes if you buy the ninja scroll, position doesn’t matter.
9. Call her over specifically in the night phase (scene trigger)
10. Have balcony sex 3 more times, position doesn’t matter.
11. Have dinner with them at the bar 3 times. This will be signified by an “!”
12. The alley will now have an “!”. Wait till Husband has a work dinner and call Chiho in the alley. Do this 2 times.
13. Unlock costume by farming 250 dark energy (aka lust) if you haven’t already.
14. (unclear if this is optional) have costume sex on balcony
15. Unlock trench coat by farming 300 dark energy (aka lust).
16. Talk to the 2 guys in the market with the “!”
17. Call Chiho in the market at midnight 3 times. On the 3rd time you’ll have to climax 5 or 6 times to successfully finish the scene.
18. Talk 2 times at the bar to finish off all hints

Replayed through it, it takes roughly 1:40 if you do cheat engine for money. So probably 2:00 with no cheats and 1:20 if you cheat dark energy farming.