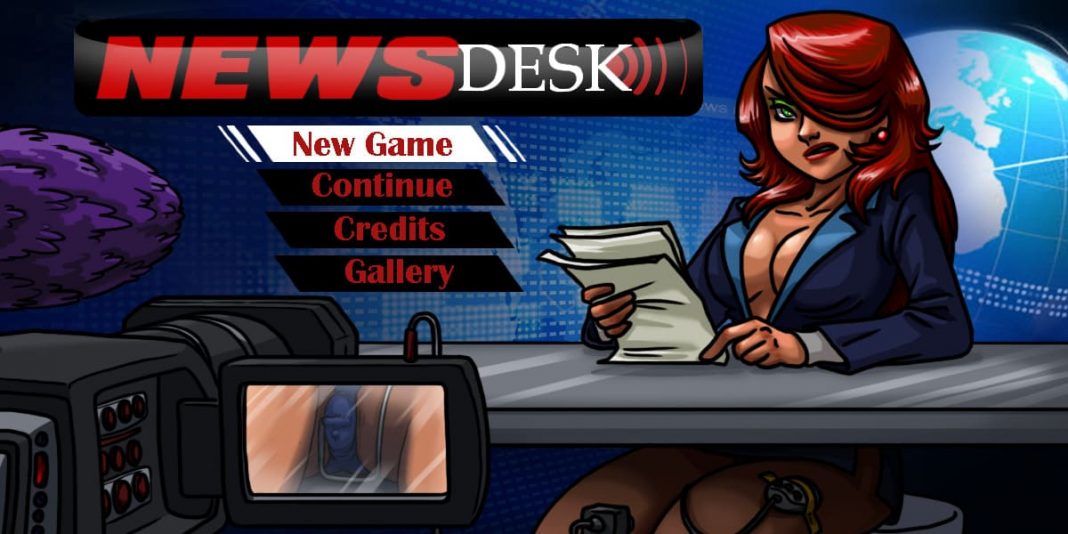 News Desk v1.0 by Pyorgara, News Desk is a game about You will play as Garrick Reynolds, a news co-anchor. You and your female co-host, Cassandra Hamilton, are both alphas that clawed your ways to where you are now. The new problem is that the station is getting bought by a big news corporation and there will only be one anchor when the sale goes down. Both you and your colleague will try to sabotage each other to get that coveted spot. Maybe her college aged daughter would be a good place to start.​

2D game, 2DCG, Male protagonist, Turn based combat, Text based, Masturbation, Sex toys
Installation
– Extract to desired location.
– Run.
su_spoiler title=”Dev Notes”]How to play:
– Each round, you will get to play first. You can play your cards, use your allies and try to remove her cards.
– After you’re done doing your actions. Press the “done with round” button.
– When pressed, the game will check if you have at least 50 “Influence”. If so, you will win that battle and have your accumulated “Work” added to your glory. Meaning that you managed to get the better of her that day and hog the spotlight.
– If you didn’t win the battle, she will then play all the card that she has remaining.
– When she’s done playing, the game will check if she has at least 50 “Influence”. If so, shewill win that battle and have her accumulated “Work” added to her glory. Meaning that she managed to get the better of you that day and hog the spotlight.
– if she didn’t win, you both will get new cards from your draw piles and play another round until someone gets to 50 influence.
– “Glory” is the game winning stat. The first one to 1000 will get the position being fought over.

To play your cards:
– Click on a card at the bottom of the screen, it will become zoomed in.
1 – Click again on the zoomed in card to actually play it.
2 – Click on the white zone to un-zoom the card.
3 – Click on another one of your cards to zoom it instead.
– The card will be played if you have the resources to play it. There are 6 stats at the top of the screen each with their own color code. (Energy, Money, Blackmail, Influence, Work, Glory) The number at the top left (and sometimes right) of a card will be color coded for what resource(s) it will consume to play it.
– What playing the card will accomplish is in the blurb at the bottom of the card.
– the dark grey part is the title of the card. Depending on how upgraded it is, it’ll have one or more “+”. Ex: Work hard, Work hard+, Work hard++.
– The white part (between the prices and the blurb) will be a simple drawing to easily recognize the card in the future.

To remove her cards, simply click on it (it will get a purple siding) and then either click on the highlighted resource or click on your cards that you want to discard/spend, depending on the price asked by the specific card. It will automatically discard itself if you can meet the price and it will give you it’s reward.[/su_spoiler]

Game Terms
Round
From the time that the player can play card to when he press the pass button.

Battle
The entirety of the day’s rounds.

Spend
The card is removed for the rest of the battle. Will be able to use it again in the next battles.

Return
Put card back into your draw pile.

Destroyed
The card is removed from the deck forever.

Draw
Get a new card from your draw pile and put it in your hand.

Discard
Remove card from hand and place it in the discard pile.

Reshuffle
Put the cards in your discard pile into your draw pile.

Loyal
The ally can now Join.

Join
ally is active. Only 3 can be active at a time.

Tapped
ally has been used for this round.

Ready
ally hasn’t been used for this round.