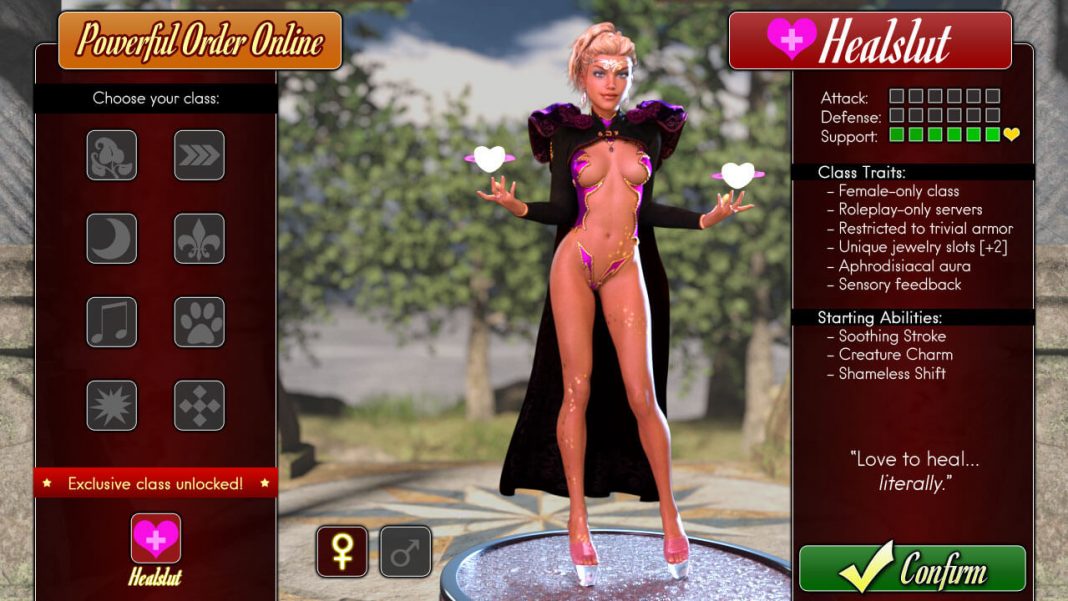 Healslut adult game is about upon taking up the opportunity to join the brand-spanking-new expansion to the super-popular MMORPG Powerful Order Online as a beta-tester, you find yourself locked into the very odd (and apparently exclusive?) class of Healslut. Just how will you handle the power… and consequences?​

But the following are in this update:

v0.5e
Relegated to serving dinner if you are the (non-FU) looter
Added end of dinner conversations
A revealing conversation with “previously dead” Lel
Introducing Skylark to Panki/Panki+Lel (and possibily adding her to your ‘harem’)
Splashy after-dinner bath with Panki/Panki+Lel/Panki+Lel+Skylark
Bit of bonding (i.e. bondage) with solo-romance Lel
Possible night with Kayden (if boi)
Roopah now imposes free-use if making your decisions (if looter & not with her)
More options added to the ‘skip to Act 13’ menu

v0.5D
Dinner now shows correct selected collar for each scene
Girl backup body poses made less ‘slumpy’
Fixed a few lines of ‘See No Evil’ dialog to account for the blindfold
Fixed incorrect Sparkle variation showing up in slaver parlay scenes
Fixed futa milked body outfit inconsistencies
Fixed Wejit visit repeating after Sparkle getting shot
Fixed some cloth draping issues with the fuzzy britches outfit
Fixed a few issues with Panki/Panki+Lel conditional branches
Fixed inconsistencies with some Lel alive/dead dialogs
Fixed label jump that would not properly award the pirate cutlass
(non free-use) Ends abruptly following the after dinner chat with whomever you sat with
(I will add additional options to the Act 13 skip in the next release.)
(The bitgag not showing up in the looter outfit is a known bug. I’m still working on it.)

v0.5C
YOU NEED TO DELETE YOUR ENTIRE OLD HEALSLUT DIRECTORY. MANY IMAGES WERE RENAMED/MOVED SO THERE WILL BE A LOT OF DUPLICATES/BLOAT IF YOU SIMPLY ‘OVERWRITE’ IT.
OLD SAVES WILL NOT WORK CORRECTLY. Sorry  So many code and image changes!
You can opt to skip to Act 13 when you start a new game. You will have to make a few choices but then you can carry on from there instead of a complete restart!
Lots of new tracking variables added for fixes and future branches (hence why old stuff is broken)
All outfits now available for all bodies and variations
First part of ‘free use’ collar dinner (Champ takes round two)
IMPORTANT: right now all the dinner free-use sexytimes scenes will show the “All Dressed Up” collar but this will be corrected soon!
Bug/typo reporting now included (will create a file called _BUGGERY.txt that you can upload or send to me)
Dialog font choice now available in options
Waking up with Panki after a nap quickie (Panki or Panki+Lel routes)
‘Roopah always dead’ bugs fixed (hopefully)
Interesting/revealing dinner dialogs for all major characters
Ends abruptly after Kayden speech. Work continues!

v0.5
Healslut 0.5 Release
Been a long road here and this will not be the last 0.5 version because there is a lot of setup to satisfy before 0.6. So expect an A/B/C soon enough. The A update will include the upcoming dinner and will focus mainly on sexytimes with your current partner(s) and/or new partner(s).

UPDATE (AGAIN): Links have been updated to fix three annoying bugs that got by me.
Changelog:

v0.4g2
Extended decisions on how to handle the murder non-mystery
Maybe get pregnant? (Ends early for now, this is currently what I’m working on)
Another way to the early ends in 0,4G
Meetup with Pirate Lel or another Lel
Consequences to blaming Roopah teased
Can how offer Wejit relief after the investigation
Anyone notice the new stuff sprinkled in early in the game?

v0.4g
I suppose I’d call this more of a ‘cinematic’ release than anything else. Most of my focus went to the ends to your adventure. I don’t want simple ‘game over’ screens for any choices. I need the endings to be meaningful (and hopefully impactful).
I had hoped to have the ‘preggo’ path in as well but I chopped that out of this one because I’m still working on it. It’ll be out in a patch once I am happy with it. I also have a big chunk of the ‘blame Roopah’ path already done so I will patch that in as well. So please forgive me for now for the abrupt ‘end of beta’ cuts on those choices. I’ll have them out as quickly as I can.
Changelog:
Many proportion fixes (still in work)
All character renders have been touched-up and/or re-rendered
Several scenes have been updated and/or added renders
A metric poopton of typos and grammar errors corrected
Nudity aboard the ship received more attention
“Mention of mushroom” bug with Swollwang fixed
“Barf it up” bug/loop with Lel fixed
After Gab visit bug with Panki instead of Champ/Twig fixed
Non-“suppress suffering” spells in customs office bug fixed
Fairy chub/slim mixup after Gab convo fixed
Small bugs with fishing mini-game fixed
Roopah now acts more consistent if Sparkle snubs her
Murder- (non)mystery solved, accusing the perpetrator, and deciding consequences *Consequences may include pregnancy or death.
Two possible endings to your story…

HINT: You are not at the end unless you are at the menu screen.

The ‘sticky’ question that Gab asks can be reset by starting a new game (which clears the flag) and then reloading your save before the question is asked.

v0.4e
The ‘sticky’ question that Gab asks can be reset by starting a new game (which clears the flag) and then reloading your save before the question is asked.
[*]Bugfix for trap with Panki+Lel – will need to load a save before telling Panki you messed around with Lel for this one. Sorry!
[*]Bugfix for the loop with Gab/Lel/Kayden. You will probably need to load a save before going into the corner. Sorry again.
[*]Sexytimes with Roopah (requires previous sexytimes with her)
[*]An introduction to a murder mystery
[*]Can now switch body types on the fly in the main menu so you can try out scenes in different bods. May cause weird issues if you do it mid-scene, so I suggest doing it before a new scene starts (i.e. pretty much anywhere before the background changes)

This update contains content addition for the ‘free-use’ route that Sparkle can agree to while serving as ‘loot puppy’ and therefore will only appeal to those interested in those paths and activities. But worry not, the next big update will include more comprehensive content for the various dominant and submissive paths!
Images

WARNING: There has been a rather large overhaul of the game structure. Saves from previous releases will not work for this version. You will have to start a new game or there will be strange bugs and broken scenes.