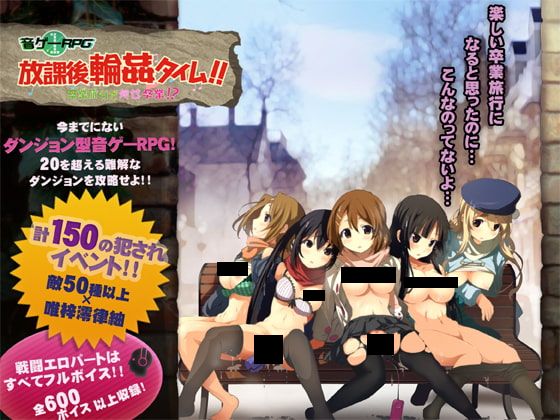 But Yui and the gang forge continue their journey.
They even have sex with each other!


Installation
1. Extract and run.
Dev & Translator Notes
This is a (mostly) full translation. All the story and fights should be translated, and some of the images, though a few I couldn’t be bothered with (like the screen that gives your stats at the very end; it’s the same as the menu you see in game, so that shouldn’t be a problem). I’ll post in the discussion thread some info about the game itself; as regards the translation, it should work as is. Please note that if you move the game folder it’s likely to delete your save. There are some game ending bugs that I couldn’t work out how to fix, so please read my post in the discussion thread for workarounds. Also, you have to play the game itself up to a save point before the other modes work (random fight, boss rush, etc), otherwise your level and instruments will be undefined. Link to the translation is in the attached file; run using either the html with the game’s name in the folder (or the game.html in the swf folder). The game is in Flash; it runs fine in my internet browser, but I don’t know if you might need to update flash or give it permission to run.

Enemies are trying to ruin your groove:
Speed, motion and rhythm are your focus in battle.
You get 5 mistakes per battle… after that, the r*ping starts!

Level up, equip weapons, use skills, beat dungeons…
Over 20 dungeons across 8 huge maps!!
Over 60 enemy characters (not including variations)!!
Plus characters from Puella M*gi Mad*ka Magica and Dr*gon Quest too!

Free play mode with random battle mode and survival challenge!?
Movie mode (after you beat the game) to any scene!!
Images