Kingdom of Deception v0.12.4 by Hreinn Games, Kingdom of Deception After centuries of struggle between races, humans have established the fearsome Kingdom of Lundar. Fueled by ambition and hunger for glory, the human forces are on the verge of completely annihilating all territories controlled by creatures that have not become vassals. The last hope of fighting off the human armies, a vast monster horde, has been defeated, leaving Lundar as the master of all. Their outside enemies defeated, the noble families and military factions of Lundar have quickly turned on each other in an internal struggle for power. In this vicious conflict, not even religious or family bonds will be spared.​

First of all we want to emphasize that you should back up your saves, because this update changed a lot of base content so it is bound to have a lot of bugs and problems that might ruin your save data.

Next, we decided to go hard on some major repeatable CG’s as content, so much so that barely even half of what we have made it in this update. We decided that we delayed enough, so we will release now with some of them completed with writing, and the rest we will release in a fast follow up update that will just be adding what we already have finished as art while providing fun writing to it. Sadly while the art is done for scenes that had Neve, Flufftooth and more of what you will find in this update, we didn’t get to add them here, so expect them soonish in the next faster update, since we didn’t want to just rush them in and not give them a nice setting and writing.

This update has some new bases and backgrounds too, that we will be using in future content as well, backgrounds aren’t the most flashy thing, but they are very needed.

The groping CG with the new outfits is done, you will find a new butt for Sabia and the outfits are there, but we have yet to implement them in a scene, those will come in the next faster update.

Content wise as said we have reworked all the Sabia’s tent scenes in normal CG quality and added a lot of content with those, we have multiple scenes for both Sub and Dom. A lot of the scenes you will see, like Vehlis, Bris and Sabia or the Human males scenes are just the introduction of more to come, some in the next faster update.

-The big quests are Sabia trying to infiltrate the Kullar organisation that kidnapped Vehlis last update, it has scenes for both sub and dom as she does her best to get very needed information.

-A start of a chain quest where Vehlis faces trouble in the orc camp after Jasmin damages her power structure, we only have the Sub scenes here if you fail badly with you choices, but expect Dom next time.

-A big event after Vehlis sponsors Sabia to manage the tents unlocks the power struggle between Sabia and Bris, depending on sub or dom both girls get to have fun with the other and try and assert their dominance. This one had a lot more scenes than we added, but it’s a good start to show you guys the new reworked CG and its potential.

-There is also trouble with Elmy and how she gets to restock her shop after the Vehlis quest, so depending again on sub and dom variables Sabia gets to help with the start of even more repeatable scenes that will be expanded on as she tries to sell merchandise.

Again, this update has a lot of background work, but we hope that what you see can show you what we were aiming for in terms of potential and future repeatable scenes that will be added so that we can add even more scenes around the usual CG’s we do. This version might need tweaks and bug fixes since we kept adding things that break the game after testing it prior, so make sure to back up and arm yourself with patience, or wait a few days until the update is more stable.

– New CG scenes!
Vehlis Captured – Vehlis has come afoul of some shady forces, and has been imprisoned somewhere in secret. Sabia has to rescue her in time. This is the biggest scene we have done both in art and writing, it is in essence a extended bad end if you fail to save her in time. It is 7000 words and 259 layers.
Neve/Sabia/Orc – Neve helps Sabia retrieve some information from an orc. This quest is both for sub and dom, it has extra content if you are Tekrok allied or have dealings with the Shaman.
Avion/Kira – Sabia and Avion have some disagreement on which is the better race, and Avion makes sure Sabia knows the proper answer. Kira enjoys having a girl with a backbone around, but still likes to be in control – and likes to make sure Sabia knows it. Which scene you get depends on whether you are sub or dom.

– New Quests!
Rescue Vehlis – Vehlis has been imprisoned by some nefarious forces. With Alioch’s help, Sabia needs to discover the location and rescue Vehlis before it’s too late.
Attack the Bandits – Kira’s hunger for larger territory and disregard of the other bandits has grown larger. She enlists Sabia’s aid to clear out another bandit camp. It’s a good opportunity for Sabia to earn more favour with the dangerous Vegardan.”
Fire! – One of the tents in Grok og Dar goes up in flames. With a piece of evidence pointing to outside forces, Sabia investigates. A Tekrok aligned Sabia will have a different start ot this quest.

– New Character!
We’ve excited to debut one of our new characters, someone from Sabia’s past that proves to be a thorn in her side for the moment, and likely into the future. She is from the desert to the south, and is a dangerous mage. We’re pretty happy with the design, and think you guys will like her too!

– Save notes!
Go inside Sabia’s tent and Check Progression. There’s a new button to add a Save Note that will get attached to your save file slot for easier identification of your saves.

Public Release:
– The public release will hopefully include the Quest Log, there were coding issues with getting it to work without breaking saves.
– The new male sprites will be included in the public release

– Some small QoL additions for a few quests to make it easier to keep track of the next step.
– Bris scene added in. You will need a save that does not have the Bris quest completed in order to see the scene. We had a pop-up message in the placeholder version mentioning to make a save for this purpose, we hope you have those saves ready!
– Prison Orc quest has been reworked significantly. There are defined paths for both Dom and Sub, the orcs are more fleshed out, and it is now skippable. (IMPORTANT: Make sure to save your games on the main orc camp screen before loading them in the new version to avoid any conflicts.)
Bugfix patch:
– Some erroneously named assets in the script that were causing exceptions.
– Not being able to jump to the outskirts on some occasions on the earlier parts of the game.

v0.10.4
Amelia Quest – Amelia wants to visit a nearby town to see a Lustrator in person and asks Sabia for her company during the travel.

Bris scene – In an effort to get a leg up over Sabia, Bris sets out to investigate some of Sabia’s secrets, but ends up stuck in a predicament. (IMPORTANT NOTE: Due to finding an issue with this CG at a late stage, it will be added with the public release. Nomo wanted to fix this, so we chose to do it this way so that we did not delay the release.)

v0.10
– New CG scenes
Neve Bar Scene – Drinking with Neve in the bar now has a sexual conclusion for either sub or dom Sabia’s, though Neve is bent on getting her way with it.
Ornshakar Ritual – Ornshakar has another ritual for poor Sabia. She might be regretting her choice of allying with Ornshakar now, but it’s a bit too late to back out.
Bris scene – In an effort to get a leg up over Sabia, Bris sets out to investigate some of Sabia’s secrets, but ends up stuck in a predicament. (IMPORTANT NOTE: Due to finding an issue with this CG at a late stage, it will be added with the $5 release. Nomo wanted to fix this, so we chose to do it this way so that we did not delay the release.)
New ‘simple-CGs’. In an effort to continue expanding and adding more sexual content where we can, we decided to see what else we can offer with this. We decided to use a simpler style with only a few variants to introduce short scenes when possible into the game. You’ll find most of these in the Prison quest, but we do have a bad end variant in .10. These are currently a proof of concept for simple repetitive scenes that can involve different members of the cast (Neve, Maply, etc), and will be 4-5 layers (like these ones.) We would love to have your opinion regarding these.

– New Quests!
Maply Quest – Maply’s worry about Fluff Tooth in the kennels is resolved.
Ornshakar Ritual – Ornshakar has called Sabia to participate in another ritual for the tribe. She must recruit a few orcs to attend that she may have run across in the past.
Lynn Information Quest – With Lynn’s influence and plans expanding and taking hold of the region, both Sabia and the orcs are interested to discover as much information as they can. There are two distinct ways for the information to be acquired depending on which Captain you have allied with.
Kia Quest – Kia is concerned that the tentacle monster is not eating, and Sabia is forced to ensure that it gets what it needs. Bris investigates Sabia.
Prison Quest – Sabia discovers the location of an old Ally and a potential path to regaining a fighting force. Includes the new ‘simple-CGs’ and has path for both dom and sub.

Saves: Try to save at the camp screen, your saves are least likely to get errors there, from version to version. 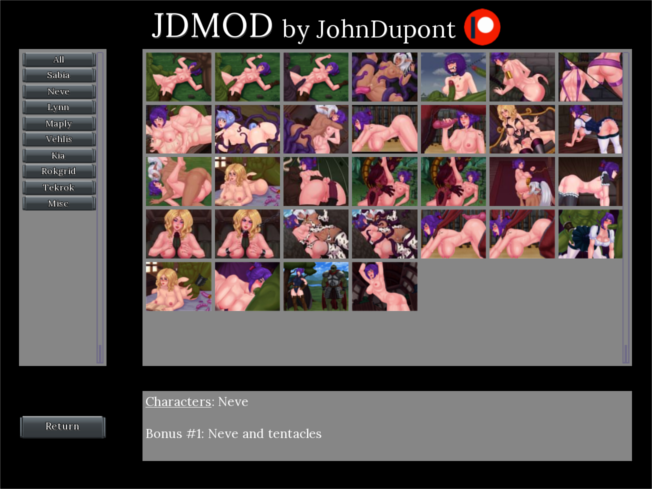 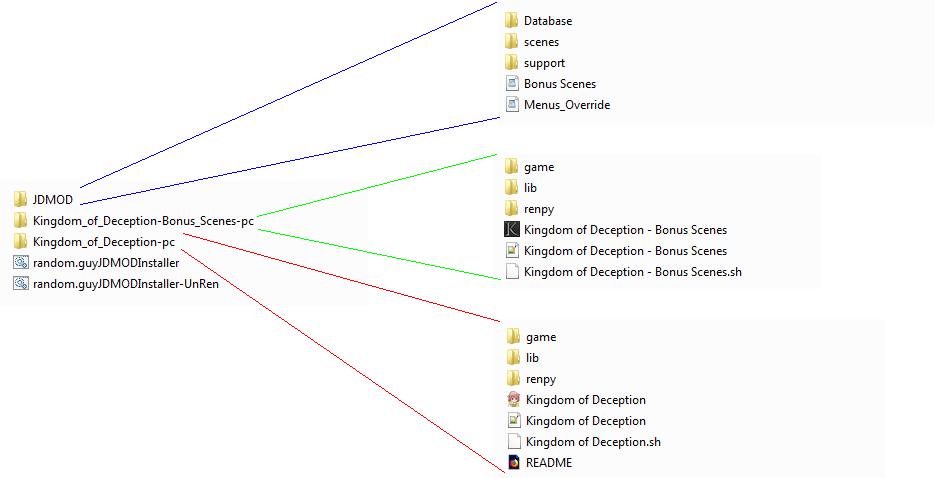