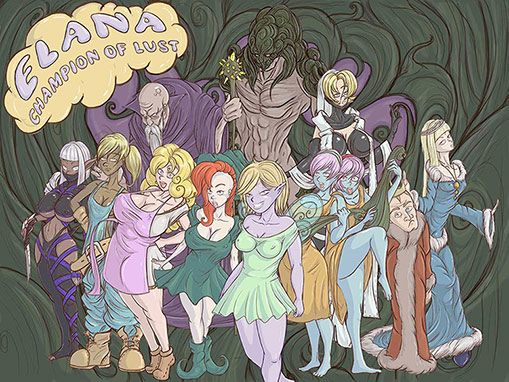 Elana Champion Of Lust Ch. 3 v1.6.1 Beta by Knot Games, Elana Champion of Lust is a game where you will have to bring back the natural order to an island where the people have lost and forgotten all about lust and passions.
You will control Elana, a fairy who has found the energy of lust and passion that was once removed from the people..

Game divided in 3 chapters where the player will control Elana, the champion of lust, helping her to fulfil her mission. The game is made to be played in a Pc but, once in a wile, we publish an android version (with much low frequency than the Pc’s ones). The next android version will be published when the chapter 2 reaches the Beta version.
The game can be played in English or Spanish (Spanish only because it’s written in that language, and due to the high amount of text that it contains plus the incoming events, the effort to translate it in other languages would be too big for the team).

Thousands years ago, in a forgotten island, thanks to the dark arts and by a mad king’s order, the lust and passion energies were removed from mankind. The inhabitants of the island stop reproducing so magic powers had to be used once more to create a cloning system, preventing them to become extinct.

Years past and the removed lust energy concentrated, becoming aware of itself and finally turning into a physical form. Once it was ready, it took a fairy as her champion that will accomplish the quest to return the lust where it should be, inside every inhabitant of the island.

2DCG, Big tits, Group sex, Oral sex, Stripping, Titfuck, Fantasy, Lesbian, Demons, Elf, Fairy, Witch, Corruption, Female protagonist, Mobile game, Monster, Monster girl
Installation
1- Extract to desired location.
2- Click on “the html or exe” to start playing.
Changelog
Chapter 3 1.6.1 Beta
· Bug fixes, a lot of them. Everything reported should be fixed plus a lot of small and some times not visible things around the worlds. We have done a swept world by world optimising and fixing everything we’ve been able to find.
· Added around 50 images for the academy. Images for the gym, Kaeryn, Jenara, Nightfort class and Moonstruck class.
· Adjusted facial expressions of some worlds.
· Added a pop-up to allow the player to keep wandering around Jane’s world without closing it, if wanted. A button appears in the top right of the screen to close it at any time.

· Added new system to enter the codes to make it work for android version.
·Now the assets of the game load before starting the game, which prevents some previous loading issues, although it may take some seconds to load (depending on your machine). Since there is still no loading bar, if the game shows you a black screen for a while, don’t worry, the game should start soon.
· Added some sounds and greeting sounds (some from: https://missmoonified.newgrounds.com/ ), but most of them are just experiments and not properly in place.
· Now you can control the volume of the sfx and the music separately (although it could need some rearrangement).
· Some fixes here and there.
· Added Excess world (the arrow to go there appears in the lust zone after completing the first world).
· Added about 140 events for the excess world.
· Added 80+ images for events of the excess world + 6 new backgrounds.
· Added 2 animations for the excess world
· Added 17 new avatars for characters.
· Added 16 new avatars for characters.
Images

Where It All Began [Ch. 2 Full][Oceanlab]