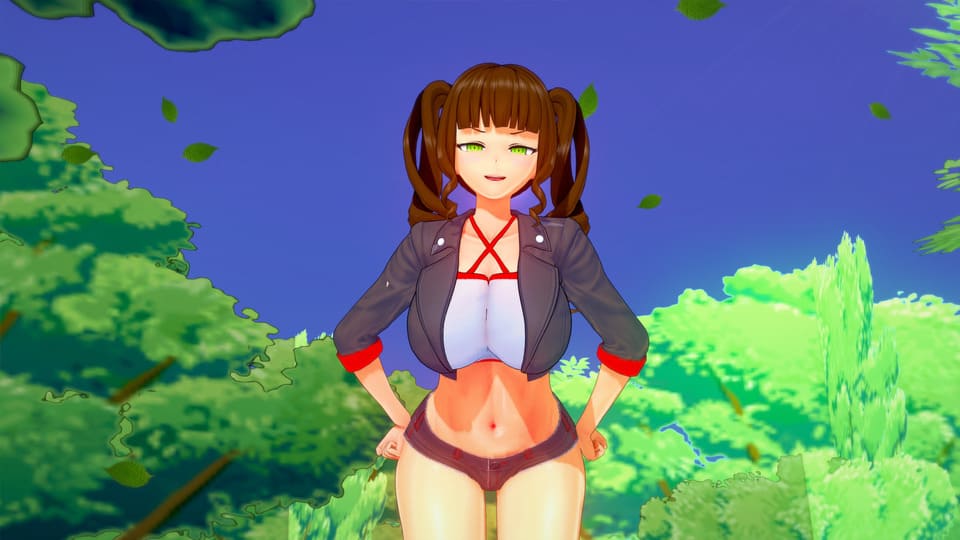 Champion of Realms v0.63 Public by Hell Games, Champion of Realms or Previously name as “Champion” game is about the world was born in chaos, the ancient gods to avoid further conflicts separated their offspring in three different spatial and temporal dimensions, entrusting the protection of them to the Champion. Now, however, the Champion has disappeared.

It will involve the protagonist, despite himself, to take part in the games to become the future Champion. He won’t be alone in this adventure, in fact, to help him, we will find trusted allies with which he will pass not only the toughest moments but also those of extreme pleasure.​

Game overs have been added, with their own animation, for now only in three particular places in the game. They will be improved in the future by creating renderings for them.

For those of you who don’t know how to click on quests, I’ve added a quick tutorial, so you’ll understand what to do in case you get lost.

Now, the unlocking of maps will be done through story progression, to reduce the random wandering of players

Stats have been reworked, ready for their new use

The game’s main menu now changes based on story progression, and you can choose your favorite once unlocked by Maeve.

A similar thing has been applied to the stats menu

The same thing for Cleos and Dangers Lurking ones, now you will know when the girls content has reached the unlock of that quest

Fixed inconsistencies with the book Genesis

In the old Asmedia room some video files were missing, now they are present again

Some placeholders remained on screen, fixed those too

Cleos and Asmedia stories have been updated in their menus

All lewd costumes in the girls’ menus are now blocked by progression.

There have been several improvements to the Signals, renamed Quests to end the confusion of several players

Neon has received her final design

Highlighters have been added in some places to improve comprehension

Changed the font of the character names, no one will be confused to call Izanami Kanami anymore

Menu fluidity has been improved

Coming soon new unlock animations for cards, already present in game one for Asmedia, but an even more beautiful version is in the works

Changed the wing symbol of Asmedia and the puddle symbol of Heramael, replaced by a Caduceus

From now on the events of Hell will not be triggered continuously in the bedroom, added an icon to continue in his quests

Added a bugfix in Maeve’s menu for Cleos’ quest “A thousand lives”, click it and the pic will disappear

Fixed a mixed alarm error with Cleos and Asmedia

Fixed also an issue with the clock in the void

Fixed Cleos’ interactive, it could happen that those scenes remained on-screen slowing the game

There’s more, but these are the most important things.

New updated prologue with new renders and a new start

Costumes are coming to the game, and Sheila will be the first one with her Maid Outfit

Asmedia Good mornings and Good Nights, now you can sleep with her or do a special interactive Boobsjob

New parts of the prologue

Removed the bed icon in the old hub, to sleep use the real bed

Changed the bg of the old portal house

All the girls got the screen of an lv up

Now the stats of the girls can be increased

Abyss Book is replaced by Genesis, some stories changes for this

Changed the names of some music, in case of error, just ignore

Renpy update with new universals apk, be careful when updating the android version

Fixed an error in the sleep system

Fixed the functioning of some icons of Back.

v0.61 Public
What’s new in this version:
5 new story events, including a big one
New event for Maeve
New music

You will find 5 events for the girls:

All the initial prologue

Asmedia up to the story of her past

Hera until the experiment with the potion

Izanami until his duel

The first meeting with Estia

The first meeting with Cleos

The summer event is here, activate it from the meeting room

Now you can find Cleos in your room

Now you can find Estia during the night in the living room (I corrupted the pic, I know, my fault)

A new card appeared in the compendium

A new job is available (a quick one for now)

Graphic change for the main menu

The nav menu is back as before

The Bridge Events are removed

Added the receptor crystal, will allow you to perform different actions inside your room. With it, you can go to Maeve, Hell, and call the girls for the night

Added the ability to sleep for the next day.

Now you will sleep “using the bed”(lol)

The quest “The Call” got fixed, now the events will turn green

Asmedia Peak is easier to find

Bugs and grammar fixed:
The menu error has been fixed, in case you find any other, please let me know.
Fixed a bug that removed the menus

What’s new in this version:
3 new lewds for the interactive Cleos
A variant in the sofa and a new one with a variant
Hell’s room is finally here
The Core room is now accessible
New music
Changed the steps in the dialogues with the girls inside the rooms, i.e. from now on you will no longer be kicked out using the “Back”
Fixed bugs :
“Ufo” audio distorted
Sheila bridge not disappearing
“sheila_sex_jump” error
Sheila gallery error
Hints problems

What’s new in this version:
Three Hell events
One main story event
Hell headpat
New lewds for Hell: Amazon press, Doggyblow
New lewds for Estia: Kneejob
New features and changes:
Two more times, midnight and noon.
Hinters for the girls
Keywords for the girls
Talk with the girls Test Sheila
Jukebox in the main menu
Bugs and grammar fix:
New Renpy update, it should fix a lot of errors like the black screen or the getitem
All the bugs found about the money and time are fixed
All the new grammar corrections are done

What’s new in this version:
Headpat for Heramael, Cleos, and Sheila, and they are animated.
New lewd: Asmedia’s Footjob
New interactions in the Kitchen, MC’s Bedroom, and Sheila ed Asmedia’s room
New features and changes:
New action choice menu.
New inventory, while still not very fancy, will allow us to shop, craft, sell, and more.
New particle effects have been implemented and will be used from now on
New house navigation
The girls are now more alive than ever, well not all of them, but some like Sheila and Asmedia wander around the house. You might find Asmedia in the kitchen or Sheila in your room.
Bugs and grammar fix:
Renpy now is 7.4.5, seems like it’s better than 7.4.4.
The android versions of 3GB, thanks to a different signature key, work without the 4 methods, in case of problems, however, continue to use them.

What’s new in this version:
New Tailè event
Two main story events
Two events for Isabel
A new event for Hell
A new event for Sheila
New features and changes:
It is now possible to come back from “Come closer” events.
Age check will appear only once.
Name changer for Hell has been added.
Gallery has been updated with new scenes.
The intro and exit screens have also been updated.
Bugs and grammar fix:

What’s new in this version:
All the dialogues corrected ( more than 200 pages)
New Sheila Cute Alarm Clock
Now you can set days for alarms
New Asmedia Call for the night
New graphics for menus and slot saves

What’s new in this version:
4 Events for Sheila:
Family Letter
I can do it
What was that?
We are a family
Bugs fixed
Fast Travel button removed (Dusk City yellow home)

What’s new in this version:
A new event for Tsukiko: Nightmares.
A new event for Asmedia: Busy Asmedia.
A new event for Heramael: A new lead.
Graphic change for the card menu
New functions added: Time change and fast travel.
Full house navigation (wasn’t even supposed to be there in 0.44b).

What’s new in this version:
A new event for Cleos.
New random repeatable event for Cleos: Walk on the beach.
New unique random event for Heramael: PregX Experiment
New interactions for Asmedia:
Kiss that can evolve into kiss+handjob and headpat with its first and second version.
New interactions for Heramael:
Breastfeeding that can evolve into BreastFeed+handjob.
New interactions with Izanami:
Sword cleaning and “Headpat”(eheheh).
Maeve’s Headpat
Asmedia’s awakening: Now you can ask Asmedia to give you a sweet awakening every morning.
New music
New menus
Total correction of all texts and dialogues, goodbye grammar errors (I hope I haven’t forgotten anything).
Total bugfix: For this, I’m adding a little speech, the game doesn’t even have a bug at the moment, and I’m talking about 0.32, if weird stuff pops up in this 0.33, we’ll see.
In any case, if you find old bugs, it’s a problem with your saves.
If you need it, ask me and I will provide you with the necessary help.
Bugs fixed after Early:
Cleos’ Gallery
Asmedia Kiss’ sound
Lomgflash

What’s new in this version:
A new place: the bathroom.
Gallery updated with Asmedia Shower and Heramael Forest.
All the old repeatable scenes:
Asmedia Sex in the old room and shower sex (shower sex can be remembered in the new bathroom, while the other scenes from Asmedia)
Heramael Titjob (Hera Room)
Izanami Dojo sex and Festival (Izanami Room)
Tsukiko sex (Tsukiko Room)

What’s new in this version:
Two events for Maeve
An event for Tailè
New Places: Garden and Tailè Workshop

What’s new in this version:
An event for Estia
An event for Tailè
New Places: Teleporter and Dusk City
Bugfix: Now the persistent file will save the gallery correctly
Secret Event: Code “Invasion”.

This version is mainly a general cleaning and help to all old and new players, but there are also some little additions and an interesting event.
What’s new in this version:
New graphics for screens.
Hints were added in the girls’ cards.
New location: Chamber of Visions.
Secret Event: Code “Crab”.

Here are the new events of this version:
1 event for Tsukiko (Her Room)
1 event for Sheila (Main Street Afternoon)
1 event for Estia (School Morning)
Other things
Signals disabled
Name Changer Added
Since I disabled the signals, I left you the directions, so you won’t get lost.