VisitMama
Home On-going Behind The Dune 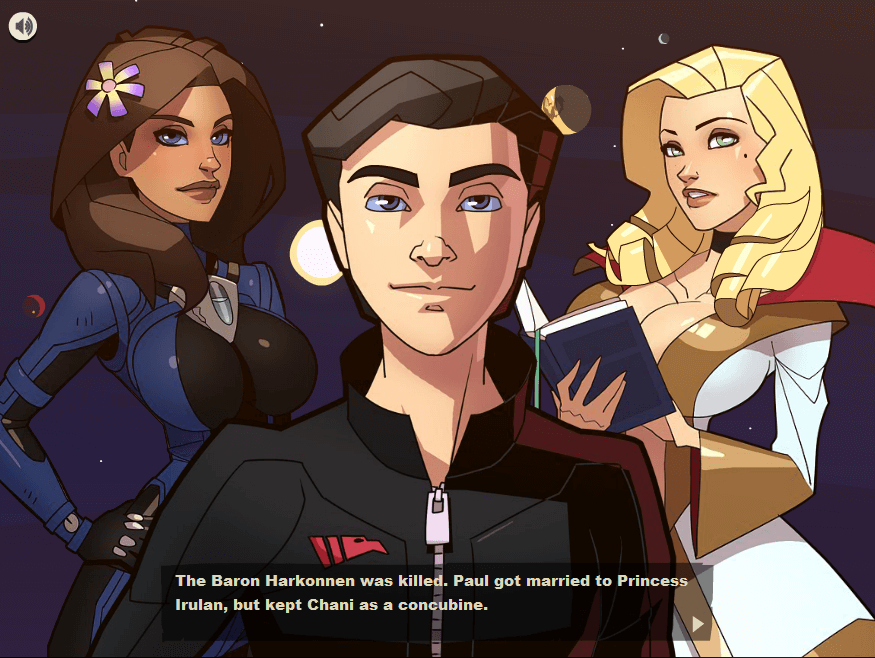 Behind The Dune v2.34 by David Goujard, Behind the Dune Game is parody of the epic science fiction novel and movie called “Dune” written and directed by David Luch. Set in the distant future amidst a feudal interstellar society in which noble houses, in control of individual planets, owe allegiance to the Padishah Emperor, Dune tells the story of young Paul Atreides, whose noble family accepts the stewardship of the desert planet Arrakis.

As this planet is the only source of the “spice” melange, the most important and valuable substance in the universe, control of Arrakis is a coveted — and dangerous — undertaking. The story explores the multi-layered interactions of politics, religion, ecology, technology, and human emotion, as the forces of the empire confront each other in a struggle for the control of Arrakis and its “spice”.​

Changelog
v2.34
-Jessica’s nurses baby Alia… and eventually Paul.
-2 GILF scenes in the story with the housekeeper if Paul had sex with the Reverend Mother.

v2.33
I have finished to color the sketched quest you saw last month in Behind The Dune. In total, there are 5 new animations and 2 illustrations.
A patreon has suggested that Paul’s butt should disappear when clicked in the Irulan end. It’s done so you have a better view.

v2.31
-Shadout mapes (the housekeeper) won the poll. She now has a sex scene if you save her from the attack.
-Her face is a bit improved, and after the attack, she can wear a stillsuit (use the mirror on her).
-An adult version of Alia is visible in the first prescience vison. She is animated (Click her pelvis).
-One more scene with Sabibah (scare Fremen), to extend the previous pee scene.
-Sabibah’s face is improved in her vaginal scene.

v2.30
WHAT’S NEW?
-New photo in Duncan’s camera. Find the traitor to see it (or just check the scene menu).
-Mirror item to talk about the appearance of interlocutors. The choices are better arranged throughout the game.
–Chani can change her outfit when she likes Paul (show her the mirror).
-The Reverend Mother has improved. She can be fully undressed if she likes Paul. She can also wear other clothes. You can click her hood to remove it.
–Many Dialog corrections. Jessica was sometimes not saying the right things after the credits. I continue to improve the other dialogs to make the game more fluid.
-The walkthrough is here. The comments are allowed on that GoogleDoc if you have suggestions.

v2.29
WHAT’S NEW?
-The sandtrout scene with Anbarin has one more animated shot.
-The end where Paul marries Irulan changed. It has 3 versions: with Harah, Chani or Jessica. The previous version is available only in the Scenes menu.
-The face of Jessica is improved in her old riding scene, same for Yueh but less obvious (watch the attached the comparisons).
-The GPS on the map is back. Click the button.
-I mention the Alia scene you can see on my Pixiv. It’s not in the game for the moment, but on another plateform it will be.

These scenes were weak points that were bothering me a lot. Now they are gone. I hope you will like that too.
… If somebody tells me “Jessica’s face was better before”, I will contain my rage

v2.27
-New long scene with Jessica. For the moment, it will happen automaticaly a few hours after her handjob scene in the water tank.
-New choice at the end: “Yes, but be my queen instead, Jessica”. If you showed interest but did not use too much the Voice on her, you’ll have an illustration (sketched).
-New item: a camera. It can have a total of 7 new pictures (sketched), many after the end of the game.
-The scene of Jessica riding Paul is back. Just click on “Other angle” in the actual version.
-When I improved the boobs of the Reverend Mother, I forgot the nipple slips option. It’s back. Touch them 8 times.
–Some people had only a black screens with the previous version. I guess it was because of the fullscreen method. I changed it. It’s not automaticly fullscreen now.
-Some bonuses of the Harkonnen end are now available with all the ends.

v2.23
-The sex scenes about sandtrout with Chani and Anbarin is finished (I think it deserves one more close-up though).
-New quest to make the Water of Life.
-The sex scene about that quest (with Khaira and Stilgar) is sketched.
–Big illustration with Bene Gesserit people (RM, Alia, Jessica, gard) to illustrate the deaths with the Gom-Jabbar test, and also when you tease Stilgar too much. Took me a while but good result I think.

v2.22
-The examination of Harah’s breasts is animated.
-Chani’s sex scene has one more screen (touch between her legs… I think it’s kind of funny).
-The Fremen leaders have new boobs animations. They move separately now, it was a block before.
-For Harah’s boobjob, the red button on her outfit works, so you can see her boobs.
-The bug making you lose the questions dialogues is fixed.
-The spice appears in the desert, depending on its amount. Living sandrouts can appear too.
–New quest about sandtrouts is sketched.

v2.21
-New little quest with Harah.
-Sketch of Yueh playing with Harah’s boobs.
-Jessica being stalked while sleeping.
-Yueh’s shower scene.
-Yueh’s sexy punishment.
-Paul dying bitten by Lady Jessica is illustrated (use the voice about 6 times on her).
-Sketch of Chani showing her pussy before her sex scene.
-You can travel in the desert even if you did not found a sietch around (The spice in the sand will be improved later). Useless for the gameplay so far, you just can see sandworms more easily.

v2.19.1
WHAT’S NEW
-A new version of Jessica riding Paul. You can watch it in the Scenes menu (You saw it on my page last month).
-I continued the story of Alia.

v2.18
-A map with a new system of harvest: better gameplay and more animations.
-3 New characters and new storylines (Harah, the Harkonnen’s captain, Alia).
-About 35 more sexy scenes (I confess 10 are “just” reskinned animations).
-A save function. The game saves your progress when you click on “Quict(auto save)”. You also have an extra save with the “Save/Load” option.
-The game works on Android phones. It has a non-porn mode to play in public
– Game is available in SWF format
[/epcl_tab] [epcl_tab title=”Installation”]

Note for the phone players: If AdobeAir doesn’t install automatically, you can download it here:
Wait 15 seconds, it will download automatically.